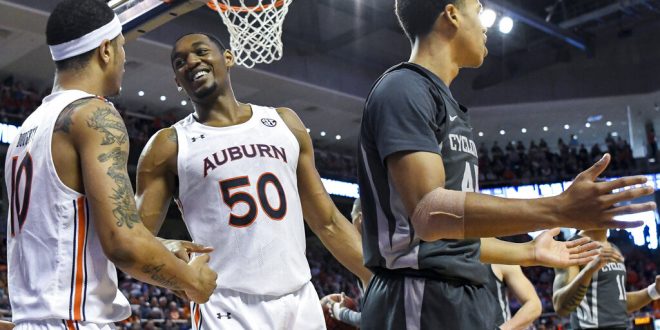 The Ole Miss Rebels men’s basketball team (10-9, 1-5) hosts the 17 ranked Auburn Tigers (17-2, 4-2) tonight at 9 on ESPNU.  Auburn is currently tied for third in the SEC standings and sits two games back of the conference-leading LSU Tigers. Ole Miss, on the other hand, enters tonight’s matchup ahead of only Vanderbilt in the standings and sits five games back of the conference lead.

Auburn has been shaky on the road to start the season with their only two losses of the campaign coming away from home. The Tigers are coming off a narrow home win over Iowa State in the Big 12/SEC Challenge.

Approaching a crucial home game against Kentucky this weekend, however, the Tigers may find it difficult to remain focused on the game at hand. Bruce Pearl and the Auburn Tigers should not take Ole Miss lightly as they were swept by the Rebels last season, including a 15-point blowout in Oxford.

Auburn is led by an experienced starting five, which includes four seniors. Auburn spreads the ball around well as four of its five starters are averaging double figures in scoring.  The Tigers currently rank 18 in the nation in team rebounding. They are led by senior center Austin Wiley, who is averaging 9.2 rebounds per game.  On the downside, Auburn has struggled to maintain leads late in games due to its lackluster performance from the foul line. The Tigers are converting less than two-thirds of their free-throw attempts this season.

The Rebels are 7-3 at home to start the season and are coming off their first conference win Saturday on the road versus Georgia.  The win was the Rebels’ first of the new year, and they look to keep the momentum rolling as they return home.

Rebels get the win in Athens! ✊#HottyToddy pic.twitter.com/FZb9qQylrx

The SEC's leading scorer is a Rebel! Vote Breein Tyree for the Jerry West Award ⬇️

Ole Miss will need a strong performance from Tyree and its other guards as Auburn poses a big threat in the paint to a team that lacks a strong presence down low. The Rebels rank outside the top 200 in the nation in both rebounding and blocked shots. It will be interesting to see how head coach, Kermit Davis, game plans for a dangerous Auburn team.

Hello, I am currently a junior at UF studying sports media journalism with a concentration in Political Science. I contribute web and radio content weekly for WRUF ESPN Gainesville. Be sure to check out some of my recent articles!
Previous UGA faces Mizzou in matchup between struggling teams
Next SEC Hoops: Aggies take on Vols