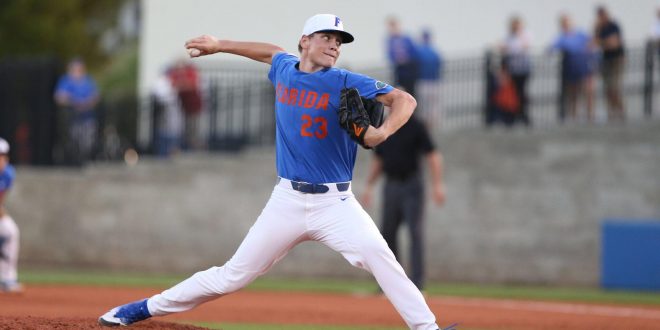 The Gators Ace eyes his returns to the Mound

The Florida Gators baseball season is right around the corner. The countdown has begun to witness star-pitcher Jack Leftwich return to the mound. Leftwich suffered a blister injury on his pitching hand last spring, causing him to miss a lengthy amount of time in the regular season that ended up extending into the playoffs.

“…Once I was healthy I felt good and had my confidence back so I think that’ll definitely translate into this year,” Leftwich said.

As anxiousness and eager begin creeping up, the Gators ace has high hopes of bouncing back, all while coming into 2020 fully healthy.

The Orlando native attended the TNXL Baseball Academy after transferring from Winter Park in his sophomore year. Leftwich continued to thrive. He was ranked the No. 7 overall player in Florida. He was also ranked the No. 1 right-handed pitcher in the state.

These accomplishments led Leftwich to get drafted in the 39th round by the Detroit Tigers in the 2017 MLB Draft. He opted to commit the University of Florida instead. Leftwich would not disappoint.

Leftwich started with a scoreless inning versus Siena. In his freshman season, he pitched in 24 games with 12 starts as a true freshman, posting a 4.20 ERA over 81.1 innings, which was the highest by a freshman at UF since 2014.

Entering his sophomore season, Leftwich set a career-high nine strikeouts vs. Georgia in just five innings on the mound. Meanwhile, he earned his place on the NCAA Lubbock All-Regional Team after pitching seven innings against Army allowing just one hit and seven strikeouts.

As the season continued, Leftwich was named the SEC Pitcher of the Week after throwing a complete-game shutout at Missouri, allowing only two hits and matching his career-high with nine strikeouts. Prior to his blister injury, he started 13 games and posted a 5.31 ERA over 62.2 innings, which was the second-most on the team.

Gator fans can catch Jack Leftwich and the Florida baseball team kick-off the season on Friday, Feb. 14 at 6:30 p.m. The Gators will host Marshall opening weekend at Alfred A. Mckethan Stadium. With a healthy pitching rotation heading into 2020, Florida has its sights back on the road to Omaha.

Angel is a student at the University of Florida. She is a Multimedia Journalist who is currently a Sports Reporter and Writer at ESPN Gainesville. Follow her on Twitter (@angelcwells) and Instagram (@angel_wells). Be sure to follow her NFL Twitter account to stay up to date with the latest NFL news. (@UpToDate1NFL)
@angelcwells
Previous Garoppolo ready to prove himself at Super Bowl LIV
Next Prepare for the Super Bowl of the Decade