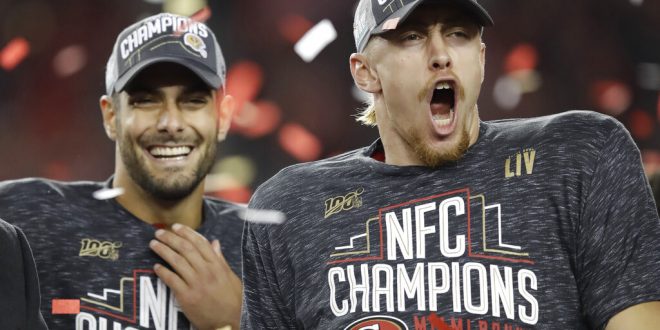 Garoppolo ready to prove himself at Super Bowl LIV

Jimmy Garoppolo leads the San Francisco 49ers into Miami for Super Bowl LIV this Sunday. This will be his second Super Bowl appearance, but this is his first as a starter.

When asked if the feeling of starting in his first Super Bowl hit him yet, Garoppolo said it probably will during the national anthem.

Coming back from injury

Garoppolo was sidelined for most of last year with a torn ACL. He spoke about his long road to recovery, and how happy he is to be in this game.

49ers remember anything can happen

Both Jimmy Garoppolo and Kyle Shanahan were a part of the famous Patriots 28-3 comeback against the Falcons in Super Bowl LI. However, they were each on different sidelines. Shanahan was the offensive coordinator of the Falcons, and Garoppolo was the backup quarterback for the Patriots. Now that they are on the same team, both guys know anything can happen in a Super Bowl.

The San Francisco 49ers have been a run-first team all year. Their offensive line has been dominant, which has lead to great success in the running game. Raheem Mostert set the record for most rushing touchdowns in an NFC Championship game four two weeks ago.

The receivers have also bought into the run-first offense. Garoppolo had high praise for that group.

Garoppolo ready to silence the critics

In order to win Sunday, Garoppolo will need to silence the people who think he’s a game manager. The Chiefs will lock in on stopping the run, so the opportunities will be there in the passing game. The 49ers haven’t needed Garoppolo to be amazing this year, but if they win Sunday he will be a big reason why. In a Super Bowl with so many great on-field matchups, Garoppolo could be the biggest X-factor.