Eastside dominated its semi-final game against North Marion winning it 5 – 2. In the finals match, the Rams were able to pull away with a win against Tavares, 4 – 3.

The Eastside Boys Soccer team has been successful so far in their postseason, but can they maintain their composure as they head into the regional tournament quarterfinals?

The Eastside Boys Soccer team is going to have a tough game on Wednesday night. Even while playing at home, Satellite has previously shown persistence in staying as a dominant team. Eastside will need all the might they can muster if they plan on continuing in the 2020 Boys Soccer State Championship Tournament.

A Junior scoring above the national average

Jeremy Jacobs is a midfielder that is ahead of the national average for goals and assist. Jacobs currently has seven goals and six assists in seventeen games. Not to mention, this is Jacobs’s first year as a varsity player for the Eastside Boys Soccer team.

The Eastside varsity soccer team has a home playoff game against Satellite in Satellite Beach, Fl, on Wednesday at 5 p.m.

Previous Gamecocks take on Bulldogs in midweek matchup
Next No. 11 Auburn Hopes to Keep Winning Steak Rolling against Alabama 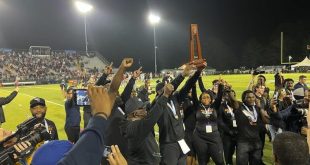 It was a long season for Hawthorne. Injuries plagued them all year, forcing many bench …