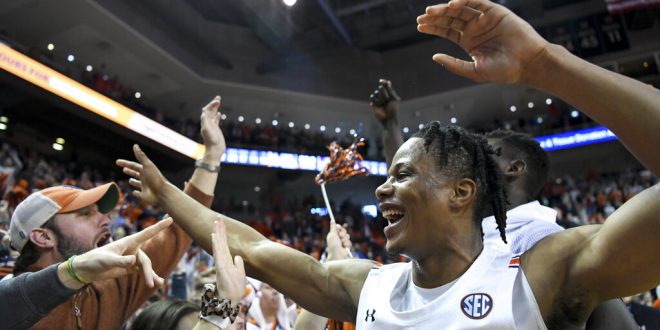 No. 11 Auburn Hopes to Keep Winning Steak Rolling against Alabama

The Alabama Crimson Tide hope to repeat history. Last time Alabama faced its bitter in-state rivals, the Auburn Tigers, the Crimson Tide demolished the Tigers 83-64. This January loss for Auburn knocked them out of the undefeated club. Auburn would drop its next matchup in similar fashion, losing 69-47 on the road at unranked Florida. Since these two defeats, the Tigers returned to form. They roll into this rivalry matchup on a six game winning streak. Auburn looks for revenge in round two of the basketball version of the Iron Bowl.

Despite riding a six game winning streak, it hasn’t been easy for Auburn. During this stretch, the Tigers had to overcome deficits in three of the team’s last six wins. Each of these deficits were double-digit holes. The latest one came against one of the leaders in the SEC standings, LSU. This comeback was fueled from beyond the arc. Auburn shot over 40% from three-point land to propel them to the 91-90 overtime victory. The win was sealed with a floater from J’Von McCormick with just 0.1 second remaining.

This was the second overtime in a row win for Auburn as they beat Arkansas the game prior 79-76.

Alabama tries to duplicate one of its best performances of the year when they meet Auburn again. The Crimson Tide rolled on offense, scoring the most points against Auburn at the time. They took advantage of 37 trips to the free throw line, converting 29 free throws. Alabama got it done on the defensive end as well. They forced Auburn into turning the ball over 21 times.

After winning three in a row following this dominant performance, Alabama dropped its next three by a combined nine points. The Tide were able to get back in the win column against Georgia on Saturday thanks to a career performance from Kira Lewis Jr., who posted a career-high 37 points.

If Alabama can match its performance they had last time against Auburn, this will be a much needed win as the Crimson Tide try to bolster its tournament resume.