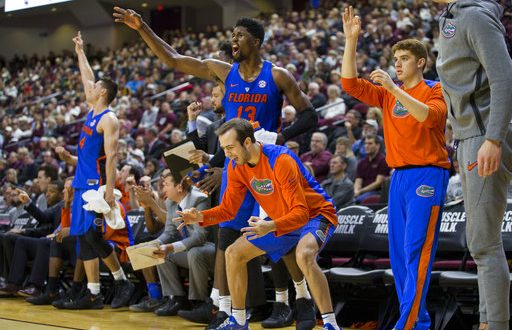 Believe it or not, the Gators could still win the regular-season championship for the SEC. They just need to win out. It’s tough, but it’s not impossible.

The tough part about winning out the rest of the way is that the Gators have to play both of their regular-season games against Kentucky.

The first game is their next matchup, when the Gators head to Lexington on Feb. 22.

How Has Each Team Done Up to This Point?

It could be worse for Florida. Early in the season, you could’ve said written them off as dead in the water against this Kentucky team. The odds still aren’t in their favor–Kentucky has a 67.2 percent chance to win the weekend game. But, Kentucky has been upset a handful of times this season.

The most notable loss was to the Evansville Purple Aces, a team that is currently 9-19 overall and 0-15 in their conference games. They also lost to Utah, a team that’s now 14-12 with a losing Pac-12 record.

Regardless, Kentucky comes into the game ranked tenth in the AP Poll with a 20-5 record and an 11-2 SEC record.

Florida came into the season with a lot of promise, being ranked No. 6 to start the season in the AP Poll. They even seemed like they could be candidates to go deep into March Madness. In reality, they haven’t been ranked since November. Still, the Gators come into the game with a winning conference record and on a three-game winning streak.

Key to Pulling Off an Upset

The Key is on offense. Defensively they’re virtually the same. Kentucky gives up, on average, 65.9 points per game. Florida, on average, gives up 66.5.

On offense, Kentucky averages 75.2 points per game, Florida averages 72.8. So, if both teams play an average game by their standards, the Wildcats win by a layup. Just having Andrew Nembhard having a game as he did against Arkansas would be enough to pull off an upset based on the numbers going into the game.

Gator Forward Keyontae Johnson thinks said a key to success was working as a team and keeping the energy up.

Harrison is a sports coordinator at ESPN 98.1 FM/850 AM WRUF. He served as a beat writer for Florida Gators football for the 2019 and 2020 seasons. He also contributes to WRUF's Gainesville Sports Center segments and makes appearances on the Clash on Harp on Sports. Harrison has been a content writer for WRUF since January 2019 as well.
@HarrisonSmaj
Previous Auburn Looks to Stay Perfect at Home as Tennessee Comes Into Town
Next Tampa Bay Vipers are Set for Home Opener