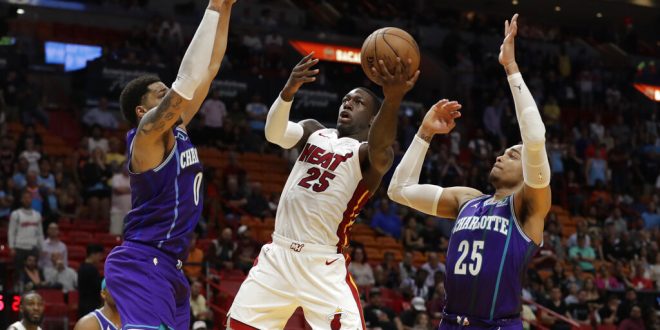 Miami Heat guard Kendrick Nunn (25) goes up for a shot against Charlotte Hornets forwards PJ Washington Jr. (25) and Miles Bridges (0) during the second half of an NBA basketball game, Wednesday, March 11, 2020, in Miami. (AP Photo/Wilfredo Lee)

Heat Get Game In, Take Loss

The Miami Heat played their last game for the time being, because of the NBA suspending the season due to the growing concern surrounding the coronavirus issue, losing to the Charlotte Hornets 109 to 98. To say the least, Miami dropped the ball on its home court, losing only their fifth home game of the season.

The Heat played such a clean first quarter that the NBA’s twitter account even made note of it.

The Hornets played a tight defense around the arc and kept nailing 3’s. Charlotte score eight 3 point shots in the quarter, including four by point guard Devonte’ Graham. He would finish the night with 30 points for the Hornets.

As the second half progressed, the Heat watched Charlotte pull away. The Hornets outscored the Heat in the third and fourth quarters to pick up the win in Miami.

The Heat originally had a chance to redeem themselves on March 13 during a home game against the New York Knicks. However, later in the evening, the NBA suspended the season over Coronavirus concerns. The Warriors game was already scheduled to be played in an empty arena prior to the suspension postponing that game as well.

Harrison is a sports coordinator at ESPN 98.1 FM/850 AM WRUF. He served as a beat writer for Florida Gators football for the 2019 and 2020 seasons. He also contributes to WRUF's Gainesville Sports Center segments and makes appearances on the Clash on Harp on Sports. Harrison has been a content writer for WRUF since January 2019 as well.
@HarrisonSmaj
Previous Mullen says all spots are open
Next Key’shaun Williams — An all-around student-athlete for Hawthorne