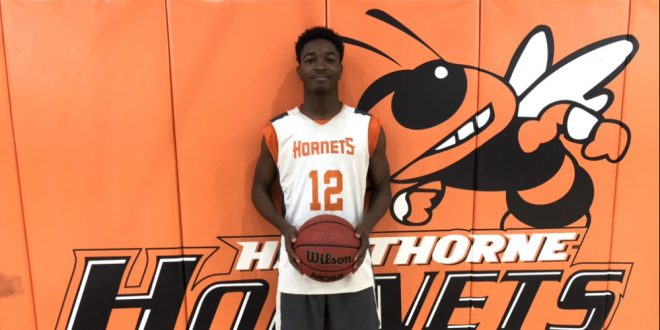 All athletes perform well on the field, but it’s oftentimes rare to see them excel both on and off it. Key’shaun Williams, a senior at Hawthorne High School, is a perfect example of an all-around student-athlete. Not only is Key’shaun an excellent two-sport athlete, but he also has a 3.9 GPA.

While Key’shaun was a team captain, he never sought out the spotlight.

“The thing about Key’shaun is that he’s never wanted to be the guy, you know. He always wanted to be a complimentary player, but he’s always had the skill set to be one of the top guys,” Hawthorne head basketball coach Greg Bowie said.

The Hornets lost nine seniors from their 2018-19 team that went 25-2, however, and Key’shaun was forced to take on a more prominent role.

“He couldn’t defer anymore,” Bowie said. “He’s involved with almost everything we do especially on the defensive end and the offense also starts with him.”

Williams may not be the team’s leading scorer, but he’s the heart of the team. He averages 1.5 steals per game and leads the team in charges taken.

“He’s kind of a pest. He’s always jabbing at players. He’ll bump them every now and then, and if they’re holding the ball, he’ll snatch it from them,” Bowie said. “He gets under their skin in his own unique way, and it’s not real loud or anything. It’ll go unnoticed if you don’t know what to look for.”

“I wish I could be Giannis (Antetokounmpo), but I’m more of a Patrick Beverley type,” Williams said of who he models his game after.

Bowie recalled one game early in the year in which Williams took five charges.

“It was against a pretty good-sized guy. Key’s 145 pounds and he was sore to the point to where the next game I told him not to take any charges, but he still took charges with an ice pack wrapped around his ribs,” Bowie said. “He’s he’s so unselfish. I don’t think I’ve ever coached a player that unselfish.”

All heart, no quit

For the football team, Key’shaun was the definition of an all-around player. He was the quarterback, the leading rusher, the kick returner, the punt returner, and he intercepted three passes on defense.

“We had an undefeated regular season the year before. We had a great fall season, but everyone counted us out,” football coach Cornelius Ingram said. “You lose that many seniors at a small school, that next year I call Key’shaun’s senior class ‘the class after the class.'”

Key’shaun took over at quarterback after Kahleil Jackson graduated, but it’s not something he was open to at first.

“He’s an athletic kid, so it was easy for me to say ‘hey, we need you to do this,’ but then, you know, I can look in his eyes and you could tell he really didn’t want to do it,” Ingram said. “But he sucked it up. That just shows you what kind of kid he is. He didn’t say another word afterwards.”

During the season, Key’shaun’s heart was displayed most during the Hornets’ 20-17 loss to Newberry.

“We called a certain play and wanted him to run the ball,” Ingram said. “The defensive end was crashing all night and we were telling Key’shaun, it’s time to pull here because we knew if he pulled, he’d walk into the end zone. He handed it to the running back, and the end made a play in the backfield.”

“We took a timeout and Key’shaun took a knee and I’m chewing him out before I can even get to him. I asked why he didn’t pull it and he said ‘Coach, my entire body is sore.’ He was crying and I’ve never seen him like this,” Ingram said. “It was funny because the way I walked onto the field was totally different from the way I walked back to the sideline. The other coaches looked at me like ‘Why is he so calm?'”

Defensive coordinator and athletic director Dustin Adkins was there as well.

“He told me his whole body hurt. I was like ‘there’s two minutes left in the game. Can you go back in?'” Adkins said. “But he just said ‘I’m not asking to come out. That’s just what’s wrong with me.’ Then he put his mouthpiece back in and proceeded to play the game.”

Coach Ingram says that Key’shaun is the kind of kid you want your son to be like.

“During away games, we will have sandwiches prepared for the guys to ride back on the bus, something to drink and a snack,” he said. “But if there was something up on the ground, he picked it up on his own. He will even put the coolers back on the bus.”

Key’shaun’s love for the Hawthorne program traces back in his family, though. Both his mother and father played basketball for the Hornets.

“Growing up, knowing my parents went here meant a lot,” he said. “As you can tell, a lot of the fans have been here for a long time ever since I was little.”

Despite his parents’ affinity for sports, he was never pushed to play.

“He gravitated to it on his own,” his mother, Shakeyla Grimes said. “I told him if you’re going to do it, you’re going to go all in or not do it at all. But he’s been playing basketball since he was six or seven years old and hasn’t stopped yet.”

Key’shaun also has never stopped being a passionate student. He said that he loves mathematics and wishes to study it in college.

“It’s not that hard,” he said on balancing school and sports. “It’s always school first, and then sports.”

Coach Bowie said that he’s never had any trouble with any teachers and he’s never worried about him being ineligible.

“Key’shaun has always been my quiet child,” Grimes said. “He has to know you to talk to you. He’s very reserved and very mild-mannered, but what most people don’t know is that he’s a big jokester.”

Adkins said that Key’shaun is the model student both on and off the field.

“I joke with our girls around here like if I was a girl in high school, he’d be a kid I’d want to date,” Adkins said. “He does everything the right way. If I had a daughter and she was in high school, I’d tell her ‘yes, you can talk to Key’shaun.’”

Key’shaun’s quietness makes for a unique type of leadership.

“It’s not loud. Sometimes, he’ll grab the ball and just hold it,” Bowie said. “That personality is contagious on the court and in the locker room, so hopefully somebody’s watching. Maybe they can be half the team leader that he is. If I can get somebody that is half the teammate that he is next year, we’ll be okay.”

“Hopefully after he goes on and graduates college, he’s one of those kids that I’d like to see come back and join the staff,” Bowie said. “I’d put him on staff in a heartbeat.”

Key’shaun also said that if he ever had kids, he would want them to grow up in the Hawthorne community. Regardless of what Key’shaun does in the future, it seems Hawthorne will always be a big part of his life.

@MikeKennedyNFL
Previous Heat Get Game In, Take Loss
Next Gator Softball Uses Pair of Two-Run Homers to Top No. 12 FSU 5-2