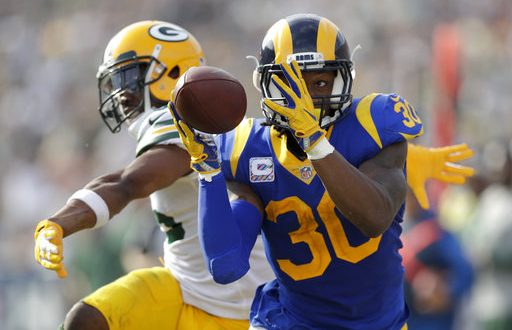 A number of high-profile players have been on the move this week during the NFL’s free agency period. And on Friday morning, Todd Gurley added his name to the growing list.

If you're just waking up, GOOD MORNING. pic.twitter.com/HXc0thfi8i

According to ESPN insider Jordan Schultz, Gurley has agreed to a one-year deal with the Atlanta Falcons. This comes one day after the Los Angeles Rams decided to part ways with the running back.

Thursday’s decision by the Rams ended what seemed like an up-and-down five-year tenure for Gurley out West. In just his third season in the league, the running back took home 2017 Offensive Player of the Year honors after recording over 2,000 yards of total offense.

In addition, Gurley also added 13 touchdowns on the ground and caught another six through the air. His quickness and ability to shake defenders when given space made him a matchup nightmare for opposing defenses to scheme for.

In 2018, Gurley was once again a major factor in Los Angeles’ offense. The tailback helped lead the Rams to a 13-win regular season that was capped off with an NFC West divisional title.

But a nagging knee injury kept Gurley sidelined for much of the team’s run to an NFC Championship title and Super Bowl appearance. This generated growing speculation about the running back’s health heading into the off-season.

The concerns over Gurley’s knee snowballed into this past season, as the tailback’s numbers on the field had significantly declined from his previous two seasons. Gurley accumulated just over 800 total yards of offense and 14 total touchdowns for the Rams in 2019.

All of the noise off the field clearly played a role in the running back’s lack of production last season and was ultimately a major part in Los Angeles’ decision to cut ties with Gurley, according to an article by Bill Plaschke of the LA Times.

Gurley heads to Atlanta with a bit of remembrance from his old college playing days. The running back attended school about an hour or so up the road at the University of Georgia from 2012-2014.

In his three-year career, Gurley helped lead the ‘Dawgs to two seasons with 10 wins or more, including a 12-win campaign and SEC Championship game appearance in 2012. Additionally, he finished with over 3,000 yards rushing and 36 touchdowns in his time at Georgia.

Now, as Gurley moves forward with his NFL career, he will look to provide a spark to a Falcons’ backfield that finished near the bottom of the league in rushing statistics this past season. According to Fox Sports, Atlanta finished with only 1,361 yards and 10 total touchdowns on the ground, good for 30th in the NFL.

Orlovsky also went onto say that offensive line development will be a key factor moving forward with Gurley now in the backfield.

Gurley now begins a new chapter in his professional football career. When he finally gets the chance to take the field, it will be the first time since being drafted in 2015 that he won’t be putting on a Rams’ helmet.

Instead, he will be putting on the red and black. This time as a member of the Falcons, not the Bulldogs. We’ll see how it all plays out in the coming months.