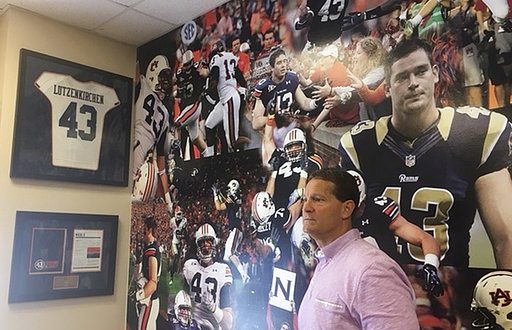 Former Auburn NCAA college football coach Gene Chizik poses for a photo, Tuesday, Aug. 21, 2018, in Auburn Ala. Chizik now works for ESPN but also owns a commercial building and three Auburn-area restaurants. He set up a section in one to honor former player Philip Lutzenkirchen, who died in a 2014 car crash. (AP Photo/John Zenor)

Gene Chizik is currently working as an in-studio analyst on the SEC Network covering SEC football, working with Gator star Chris Doering on the broadcast. But before landing that position, Chizik had multiple positions in both high school and collegiate football.

His journey started in 1981 when he played for the Florida Gators under the coaching of Charley Pell. Chizik always knew what he wanted to pursue after graduation: a coaching career.

Career as a coach

He would always keep in touch with his high school coaches who knew about his desire to coach. Right when he was about to graduate, opportunity came knocking on the door in the form of a phone call.

After that, Chizik went to Clemson as a graduate assistant and worked with the outside linebackers for two seasons. He then landed his first full-time job with the Middle Tennessee Blue Raiders and later the Stephen F. Austin Lumberjacks.

His career later took them to a newer football program, the UCF Knights program. He was there for three years and then later moved on to Auburn in 2002.

His journey continued by coaching in other big universities including Texas, Iowa State and North Carolina. Before Chizik made his last collegiate coaching stop at North Carolina, he returned to Auburn in 2009 as a head coach.

His return to Auburn was nothing less than spectacular as he achieved many milestones. In the 2010 season, Chizik led the Auburn team to an SEC championship as well as the national title. He was also awarded Home Depot Coach of the Year, Liberty Mutual Coach of the Year, Paul “Bear” Bryant Award and SEC Coach of the Year.

Former Auburn head coach Pat Dye passed away recently. Fans remember Dye as one of the best to coach the Auburn team. He led the Tigers to four SEC titles and was the first one to win three straight.

Dye influenced Chizik’s success as the head coach at Auburn; their relationship started when Chizik was Auburn’s defensive coordinator in 2004.

Chizik admired the way Dye’s mind was able to observe and analyze the playing field.

Another thing he admired was his willingness to give him feedback on his decisions in the most respectful way.

(Interview on Sportscene with Stephen Russell)

The NCAA is getting closer to implementing a rule that would allow collegiate players to receive more benefits. This new rule would allow players to benefit from their image, likeness and name.

Third-party endorsers would be able to pay these athletes for advertisements — through both commercials and social media — and from their own businesses. Players would also be allowed to get compensation from autograph signings or meet and greets.

The NCAA restricts the use of the player’s university name or logo. They also forbid universities from finding these third-party endorsements for the players.

Opinions on this rule are split among teams, coaches and fans. Some said they would love for college student-athletes to get paid for something professional players get paid for like their image.

Some believe that paying them would eliminate the whole purpose of the collegiate athletic experience.

Chizika is also split in is opinion. He understands that these athletes do bring a lot of money to their athletic programs and it seems fair to reward them for that.

But even though it sounds fair, Chizik is afraid of the negative consequences this might bring.

“Any time you incorporate new legislation there is unintended consequences that come with it. I hate to see what rewarding could turn into and I don’t like the idea of what it could turn to in the locker room.”

(Interview on Sportscene with Stephen Russell)

All three divisions in the NCAA have to approve these new guidelines. Official rules are expected to be written by October 31 with a vote occurring no later than Jan. 31, 2021. The new guidelines will be implemented  for the 2021-2022 season, if approved.

Camila is a senior at the University of Florida, who served as a beat writer for the women's basketball team from 2019 until the 2021 season. She was also a beat writer for the Gators football team during the 2020 season. Camila is also WUFT's news director as well as a sports reporter/anchor.
@CamilaMaffuz
Previous NFL Teams Taking Careful Measures for Safe Return
Next MLB Season Remains In Question