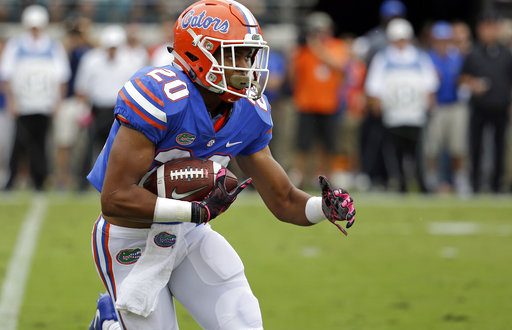 Florida running back Malik Davis runs against Georgia in the first half of an NCAA college football game, Saturday, Oct. 28, 2017, in Jacksonville, Fla. (AP Photo/John Raoux)

A Revitalized Malik Davis is Ready to Make His Mark

Back when Malik Davis burst onto the scene in 2017, it seemed like the sky was the limit. The Gators running back has shown truly great flashes but has been bogged down with injuries in college.

Davis was leading the Gators in rushing with 526 yards when a knee injury ended his season. In 2018, all it took was 13 carries for Davis to sustain another injury – this time, breaking his foot – and again he saw his season come to an end.

Last season, Davis took the backseat to Lamical Perine in a running offense that was hardly efficient. The Gators ranked 107th in the FBS in rushing offense, averaging 130.0 yards per game on the ground. This year, though, Perine is off to the NFL and Davis is fully healthy.

Davis is coming off a disappointing season last year in which he only compiled 127 yards from scrimmage. On the other hand, Dameon Pierce rushed for 305 yards and four touchdowns playing behind Perine.

Because of this and Davis’ injury-riddled past, many are speculating Pierce to be the starter this season. Davis savors the doubters, though. When asked about being forgotten as a player, he responded with this.

It has been a long hiatus from the spotlight for Malik Davis and this extended break from football hasn’t helped that. But, Davis accepts the reality of how sports work, and when it’s time, he believes he’ll make his name known again.

On top of Dameon Pierce, Davis will also have Miami transfer Lorenzo Lingard to compete with. Lingard, a former five-star, sustained a torn MCL in his right knee in 2018 while playing for the Hurricanes.

After Lingard decided to transfer to UF in January, the NCAA granted him immediate eligibility.

As for Davis, his health isn’t the only thing that’s different about the senior ballcarrier. Malik confirmed in his press conference that he’s put on about 10 pounds, putting him at 205 lbs.

When asked about it, Davis said he not only has his confidence back but also some newfound strength thanks to strength and conditioning coach Nick Savage.

Davis is easily the most experienced in the running back room in terms of age. Due to his past injuries, though, his playing experience is a different story.

Needless to say, there are three eager players in the Gators running back room. And one of them, Malik Davis, os ready to silence his doubters this season and live up to the potential that he’s been hinting at all these years.

I'm a third-year student at the University of Florida passionate about storytelling and sportswriting. My goal is to work in communications for a professional sports team after I graduate.
Previous Tim Brewster explains why the Gator Nation is blessed with Kyle Pitts
Next Forsythe Expects Florida’s Offense to Light Up the Scoreboard Every Weekend