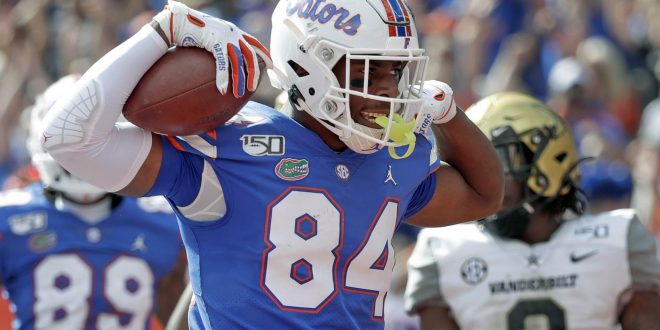 Florida’s Kyle Pitts comes into the 2020 season considered by many to be the best tight end in the country.

Pitt’s ended the 2019 season with a record of 54 catches, 649 yards and 5 touchdowns. Many mock drafts predict he will be the number 1 pick in the 2021 NFL Draft. Florida’s new TE coach says the Florida Gators are blessed to have Pitts as a part of their team.

He explains to us why Pitts is a star.

Brewster says Florida’s tight ends are special this season-especially with Kyle Pitts on the roster.

Brewster says he has had the privilege to coach many tight ends in his time. But, Pitts has impressed him and says he has a great feel for the game.

Brewster says that Pitts is truly embracing being a physical football player and is working at becoming a true three-down tight end, which is the kind of mentality Brewster is trying to bring to the room as a coach.

Coach Brewster says Pitts has played amazingly during the training camp and that he is a “tough-minded” guy and there is nothing that he cannot do.

He says that Pitts is just as good of a person as he is a player. He says he is a true leader on and off the field and that he mentors the younger class of tight ends.

Brewster is pleased with the tight ends he gets to work with this year including Kamore Gamble, Keon Zipperer and Jonathan Odom, who is a true freshman. Brewster says that these players have improved leaps and bounds throughout the Fall camp.

Tim Brewster joined the Gator Nation at the beginning of 2020 as head coach of Florida’s tight ends and as a top recruiter for the program. Before coming to Gainesville, Brewster served as the North Carolina Tar Heel’s assistant head coach/tight ends coach with coach Mack Brown.

Before that, he coached at Texas A&M under Jimbo Fisher. The tight end coach also coached with Fisher at Florida State from 2013-2017. Brewster says his time as an assistant coach at Florida State gave him much knowledge about the Florida Gators and believes he will bring much to Florida’s program.

He admits he’s always had a thing for the Gators. He is honored that Coach Dan Mullen asked him to join his coaching staff.

Previous Chiefs plan to continue momentum against the Texans in Season Opener.
Next A Revitalized Malik Davis is Ready to Make His Mark