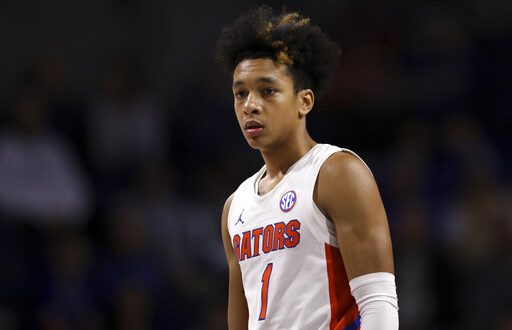 Florida guard Tre Mann (1) on the court against Marshall during the first half of an NCAA college basketball game Friday, Nov. 29, 2019, in Gainesville, Fla. (AP Photo/Matt Stamey)

Basketball season is right around the corner, and the Gator men’s basketball team has already started preparing for the upcoming season.

The Gators went 19-12 on the 2019 season and look to improve this year with more of a veteran team.

Florida guard Tre Mann says he looks for more this year with his team’s experience.

The starting point guard position is still up for grabs on Florida’s offense. Sophomore guard Tre Mann is one of many guards who are competing for the spot during the team’s fall camp practice.

In Mann’s first year, he averaged 5.3 points and 1.9 rebounds in 29 appearances with four starts.

The guard says he’s learned a lot from former Gator point guard Andrew Nembhard and guard Noah Locke last year and looks to give the same guidance to the younger guys on the team.

During the off-season, Mann says the biggest thing he has improved on is to be able to read the defense more. Mann also says that a year of experience in college basketball has allowed him to become more comfortable in the point guard position and a more vocal leader on the court.

The Gators did not have many upperclassmen last year. However, this season things have changed.

The Gators only have four freshmen on the roster. Aside from Tre Mann, Keyontae Johnson, Omar Payne, Scottie Lewis, Ques Glover, Noah Locke, Colin Castleton and Tyree Appleby are all veteran players that will bring experience to the team.

Mann says not just one person is the leader on the Gator basketball team this year, but many of the upperclassmen play the role.

There were many rumors that Mann would be ending his Gator career and enter the transfer portal. However, Mann says transferring never crossed his mind and says he was only testing the waters to see what he needed to work on as a player. He says he talked to several NBA teams to gain more insight into what he needs to do to become better and apply it to his game for Florida this year.

Gator men’s basketball begins its regular season on Wednesday, November 25 against the University of Maine. Game time has not yet been determined.