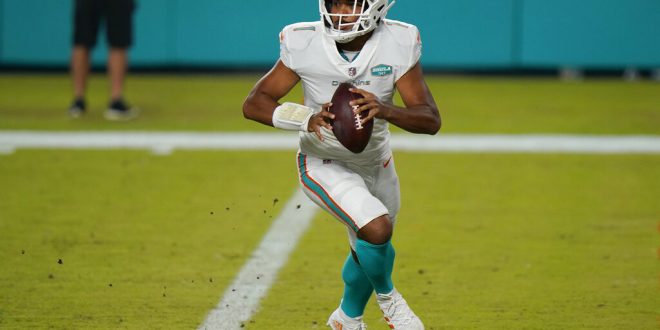 Miami Dolphins quarterback Tua Tagovailoa (1) looks to pass the ball during the second half of an NFL football game against the New York Jets, Sunday, Oct. 18, 2020, in Miami Gardens, Fla. Hopes are high Tagovailoa will be the best of the 22 quarterbacks to start for Miami since Dan Marino retired following the 1999 season. (AP Photo/Lynne Sladky)

He was the fifth overall pick in the 2020 NFL draft by the Dolphins. The Miami Dolphins’ head coach Brian Flores announced Tagovailoa as the new starting quarterback, taking over for veteran Ryan Fitzpatrick. Fitzpatrick is on his final season amidst a two-year contract with the team.

Tua Tagovailoa has been named starting quarterback for the Miami Dolphins pic.twitter.com/dTLNf6nXsh

He has been in the league for 16 years and brought Miami to a 3-3 record. Tagovailoa explains that Ryan Fitzpatrick has been a mentor for him in getting ready for Sunday.

Tagovailoa made his NFL debut against the New York Jets on Oct. 25. He had his first two-yard completion to Patrick Laird and finished out the game two-for-two with nine yards resulting in a 24-0 Miami victory.

Tagovailoa, unfortunately, suffered a hip injury in his collegiate football days almost a year ago and now is playing pro.

Tagovailoa is excited about his new position but realizes Sunday’s opponent isn’t going to be an easy one. He explains that the Los Angeles Rams have a strong defense.

Head coach Brain Flores says that the team is going to have to work together to be successful against the Rams.

It’s a team effort. Again, it won’t be just Tua, but he’s going to have to do his part as far as communication, getting us lined up, making good decisions. We’re saying specific to Tua, but this is anyone who steps on the field. We need them to do a good job with their communication, we need them to play with good, fundamental technique and we need them to execute, so we’re asking of him what we would ask of anyone that steps on the field. But again he’s young, but we’ll expect him to go out there and play with good fundamental technique and execute.

The NFL Week 8 matchup between the Miami Dolphins and Los Angeles Rams is this Sunday at 12pm.

Sara Dastgerdi is a current student at the University of Florida.
Previous Florida Forward Anthony Duruji Hopes for Breakout Season
Next Tre Mann Looks to Lead his Team this Upcoming Basketball Season