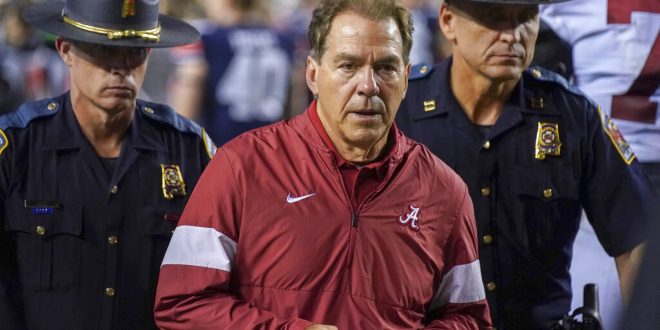 FILE - In this Nov. 30, 2020, file photo, Alabama head coach Nick Saban walks off the field after losing to Auburn in an NCAA college football game in Auburn, Ala. The mid-week news that Alabama coach Nick Saban tested positive for COVID-19 added a challenging backdrop for the season’s first Top 5 matchup. Saban figures to be communicating his marching orders and input from home while offensive coordinator Steve Sarkisian is manning the show within the football building. (Chris Shimek/The Decatur Daily via AP, File)

With this past weekend’s slate of games, the Top 10 in both major polls had some major shake-ups, including a new No. 1 team.

Florida Gators move to No. 6 and Georgia drops out of Top 10

The Florida Gators played the Georgia Bulldogs in Jacksonville on Saturday. With the Gators win, Florida broke the three-game win streak for the Bulldogs. Going into that game, Georgia was ranked five and Florida was eighth. Following the 44-28 win, the Gators move up to No. 6 and Georgia drops to No. 12. The Gators are fifth in the Coaches Poll.

Gators quarterback, Kyle Trask, threw for 474 yards and four touchdowns. Because of his performance, Trask was awarded SEC Offensive Player of the Week. The Bulldogs’ quarterback, Stetson Bennett, got benched in the middle of the game for freshman D’Wan Mathis.

Notre Dame moves to No. 2

Notre Dame faced off against Clemson in a top five matchup on Saturday. Winning in double overtime, Notre Dame becomes the No.2 ranked team in college football. Clemson drops to No. 4.

Clemson was under-manned with star quarterback Trevor Lawrence out, but freshman D.J. Uiagalelei still played well. The Fighting Irish relied heavily on the run game for the win. Sophomore running back Kyren Williams ran for 140 yards and three touchdowns.

Notre Dame coach Brian Kelly said his team “played with an incredible focus and resolve” which contributed to the win.

Despite being idle this weekend with no game being played, Alabama moves up to the No. 1 team in college football. With Clemson losing, Alabama is the next team up since Notre Dame did not take the top spot.

Jensen Young is a journalism student at the University of Florida. He works as a sports writer for WRUF.com and is the voice of trendings on Wednesday mornings on the WRUF radio station.
@Jensen_Young9
Previous Dolphins Outshine Cardinals 34-31
Next Chase Elliot Wins 2020 NASCAR Cup Series, Jimmie Johnson comments on Final Race