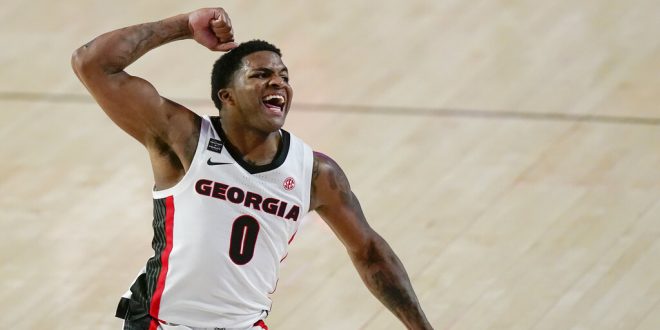 The Georgia Bulldogs Men’s basketball team pulled off a 13 point comeback against Missouri Tuesday night. The Bulldogs move to 13-8 (6-8) on the season.

MASSIVE upset for Georgia as they finish on a 41-20 run to topple 20th ranked Missouri.
Georgia improves to 13-8 (6-8) after playing arguably their best basketball of the season in the final 13 minutes of this game

Free-throws were the story of the late game. The Bulldogs made eight free-throws in the last two minutes of the game and made 21 of 26 through the whole game. The Tigers made just 12 of 15 free-throw attempts.

This win over No. 20 Missouri prevented a three-game losing streak against three ranked opponents. Georgia’s previous games were two losses to No. 16 Tennessee and No. 11 Alabama. In the Alabama game, Georgia allowed 115 points, the fourth-most in program history.

With another SEC win under their belt, the Georgia Bulldogs have six conference wins on the season. This ties what they achieved last year with Anthony Edwards, the number one pick of the 2020 NBA Draft.

The Bulldogs next plays the Florida Gators who are number 5 in the SEC. Florida lost to Arkansas Tuesday night 75-64.

Missouri next plays South Carolina on Saturday who is number 12 in the SEC sitting at 5-9 overall on the season.

Jensen Young is a journalism student at the University of Florida. He works as a sports writer for WRUF.com and is the voice of trendings on Monday afternoons on the WRUF radio station.
@Jensen_Young9
Previous Hornets Easily Fly Past Miners to Move Onto Regional Finals
Next Men’s Basketball’s Late Rally Not Enough to Top Arkansas; Fall 75-64