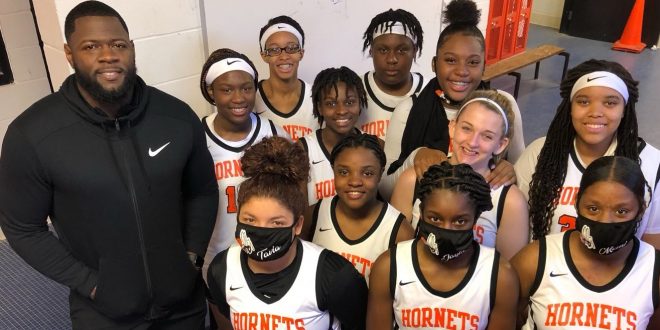 Hornets Easily Fly Past Miners to Move Onto Regional Finals

In Collaboration with Steven Hieneman

Fort Meade Is No Match

After winning the 1A District 7 Championship, the Hawthorne girl’s basketball team (18-4) set their sights on the Class 1A Regional Tournament, going against the Fort Meade Team (6-7) for the semifinals. The Lady Hornets kept an impressive lead over the Miners for the entirety of the game, going into halftime leading 48-7 before beating the Miners 66-13.

The Hornets stung first with a layup by senior Mya McGraw, quickly followed by two layups and a free throw by sophomore Jaz’lyn Jackson. Although the Miners were also able to get in one free throw, the Hornets immediately regained their momentum. When senior Oshiana Buie was put in, she did not waste her time and remarkably scored three consecutive 3-pointers. The Hornets led 29-1 at the end of the first quarter.

The Hornet’s aggressive offense and formidable defense kept the ball in their favor. McGraw’s aggressive post play and blocks were hard not to notice. Fast perimeter plays by freshman Lakijah Brown and senior Jayla Williams, known for her steals, also helped to keep the ball out of the Miner’s hands for much of the game.

Although the Hornets only scored seven points in the last quarter, there was nothing the Miners could do to make up the difference, and the Hornets came out victorious.

Before that, though, Hawthorne will go against Wildwood (18-3) in the regional final, the same team they beat out last year. With Wildwood out for revenge, Hawthorne will have to stay calm under the new pressure and heat Wildwood is sure to bring. The performances of both teams so far, and the history between them, makes this game one not to be missed.