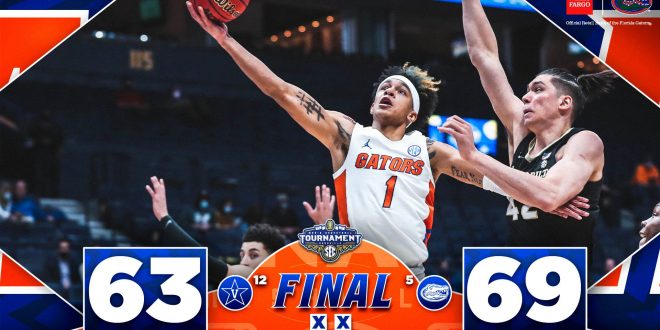 Florida got back in to action in Nashville after taking a 65-54 loss to Tennessee on Sunday in their last regular season game.

This meeting between the Gators and Vanderbilt was their third of the year with Florida winning the first two.   In this game, Scottie Lewis and Tyree Applyby were not in the starting line-up to begin the game as head coach Mike White disclosed they were late for a team shoot around.

Mixing up the line up for the Gators in the first half of the game. Florida was able to play just about everyone that was available and ended the first half leading 34-22 behind Noah Locke’s 11 points in the half.

Vanderbilt battled until the end, taking a 55-54 lead after an 11-0 run in the second half but the Gators withstood the rally and went on to win.  Gator sophomore Tre Mann led the Gators in scoring in this game going for 22 points to along with seven rebounds and six assists.

Alongside Mann, Florida had two players in double-figures  Noah Locke (13) and Tyree Applyby (12).

The Gators advance to the quarterfinal round Friday where they will play Tennessee who earned a first round bye.  The Gators and Volunteers will play for the third time this season with the teams splitting the previous two contests.

Vanderbilt’s season comes to an end.   The Commodores did win a tournament game, beating Texas A&M 79-68 before losing to Florida.  It was a tremendous year for guard Scottie Pippen Jr. who led the team with 23 points in this game.