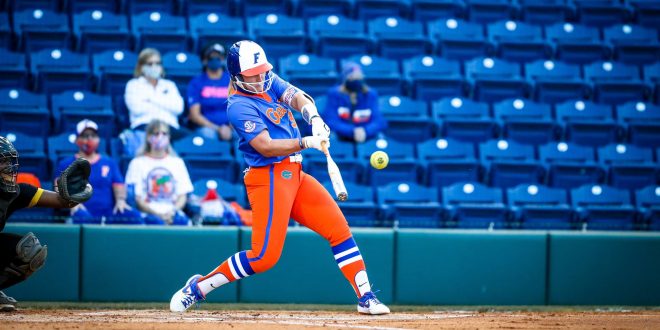 Kendyl Lindaman rips an RBI single to give the Gators a 1-0 lead over Kennesaw State. (Photo Courtesy @GatorsSB Twitter)

Gator Softball Hosts No. 9 Kentucky in First SEC Showdown of the Season

The fifth ranked Florida softball team (15-1) will host the ninth ranked Kentucky Wildcats (19-0) in the first SEC series of the year for both teams in a three-game weekend series. The Gators rebounded from losing to Florida State with a 10-2 win over Kennesaw State on Wednesday. The Wildcats still have yet to lose a game, although the Gators will be their first ranked opponent of the season.

This weekend will mark the third time the two teams have played for SEC Opening Weekend. The series will start Friday night at 6 and continue on Saturday and Sunday, with both weekend games starting at 1. SEC Network+ will carry all three games.

In Florida’s run-rule victory over Kennesaw State, Charla Echols swatted two home runs for only the third time in her career. Cheyenne Lindsey also hit a triple in another multi-hit performance, and freshman Avery Goelz carried the middle part of the lineup with three hits.

Natalie Lugo earned the win in the circle, making her 3-0 on the season. Elizabeth Hightower (0.68) and Rylee Trlicek (0.88) lead the Gators rotation in ERA, and the team ERA is a sparking 1.13.

But beating the Wildcats won’t be a simple feat. Gator head coach Tim Walton said Kentucky’s been playing good softball, so his team will have to be at their best.

Two Wildcats are hitting above .500 with Kayla Kowalik hitting .522, and Lauren Johnson hitting .517, which make for first and second in the SEC, respectively.

Autumn Humes and Grace Baalman lead the Wildcats’ starting rotation. Baalman actually combined with Miranda Stoddard for a no-hitter, the Wildcats’ first since 2018. They’ll hope to continue their dominance in the circle against a potent Gator offense.

The Gators lead the all time series 52-14. The series will also be the first three-game series of two top-10 teams so far this season.

So, it’s safe to say that a lot of eyes will be on Gainesville for SEC softball this weekend.

I'm a third-year student at the University of Florida passionate about storytelling and sportswriting. My goal is to work in communications for a professional sports team after I graduate.
Previous NHL, ESPN announce broadcasting deal
Next Gators Men’s Hoops Advance in SEC Tournament