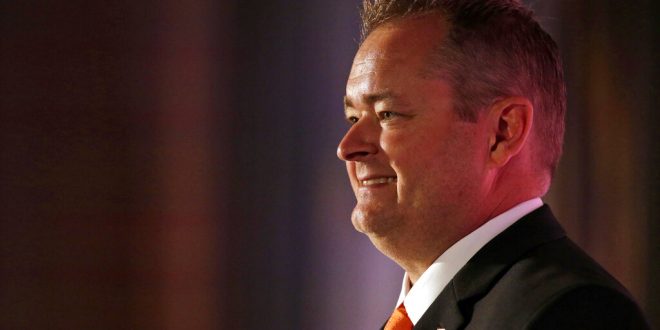 The Tennessee Volunteers may have gone 3-7 last year, but the optimism level is high. Josh Heupel enters the 2021-22 season as the 27th coach in program history, managing a new fast-tempo offense with four quarterbacks battling to start.

Heupel was a national championship quarterback at Oklahoma in 2001 and finished runner-up for the Heisman Trophy in 2000. For the Sooners from 2006 to 2014, he served as the quarterback coach for Sam Bradford and eventually the co-offensive coordinator. He moved on to a similar role at Utah State for a year when his contract was not renewed and served two seasons at Missouri with QB Drew Lock. In 2018, Heupel left the Tigers to become the head coach at UCF, where his team went 18-7.

Heupel now says he’s excited to be involved in a fanbase where they consume football 365 days a year, whether its following recruiting or watching the games.

Four guys are vying to be the Tennessee starting quarterback, Heupel says, which will ultimately be decided upon how competitively driven they are. Three were there for spring camp, while Michigan transfer Joe Milton III joined the Volunteers after spring camp. Brian Maurer from West Port High School and Harrison Bailey both saw action last year for the Volunteers, and Virginia Tech graduate transfer Hendon Hooker played during spring ball.

Heupel said this when asked about 6-foot-5 inches Bailey, who was considered the favorite to be the starter after spring camp.

The head coach also complimented Milton for how he has quickly gained the trust of the locker room.

He wants to create ripple effects in his bonds with players based on passion, not emotions. Heupel’s goal is for the players to be unafraid of making a mistake and let it rip.

Heupel said Tennessee has fully embraced NIL, and it’s an opportunity he would’ve liked to have had looking back.

“It changes the landscape and scope of how your kids think when they walk on campus,” Milton said. “They are now thinking so much more about building a brand, build their resume, the decisions they need to make. I think it’s got an opportunity to accelerate their growth as young men as well.”

DB Taylor says that he didn’t enter the transfer portal or enter the NFL Draft because as the third person in his family to go to college, he wants to complete his degree and stay in his home state of Tennessee as a team leader. Heupel being the head coach is a big bonus.

Taylor appreciates the team bonding from bowling and arcade games. Most importantly, he feels, is the upcoming training camp where the team can see what they’re made up of and further develop their chemistry.

The Volunteers defense will be more prepared than ever due to the offense’s new fast pace.

With the offense presumably improving, he said there is a big battle between the two sides of the ball. They argue all the time. Last week, when they had 7v7, they were talking trash before snapping the ball. He complimented transfer QB Milton for being able to come into the fire during summer camp and perform.

Overall, he thinks the defense deserves a lot of respect and is flying under the radar.

Velus Jones Jr. feels like a Kid in a Candy Shop

Sixth-year senior WR  Jones Jr. said that having Heupel as head coach is like being a kid in a candy shop. He’s excited for everyone in the wide receiver and tight end core.

With this new system, Jones, who played his first four seasons at USC, knows he must build endurance for the fast tempo and line-up style that Heupel likes.

As far as the quarterback battle, he said all four are great competitors and guys.

Tennessee kicks off its season on Sept. 2 with a Thursday night game against Bowling Green. Heupel begins his SEC head coaching career against the Florida Gators on Sept. 25.