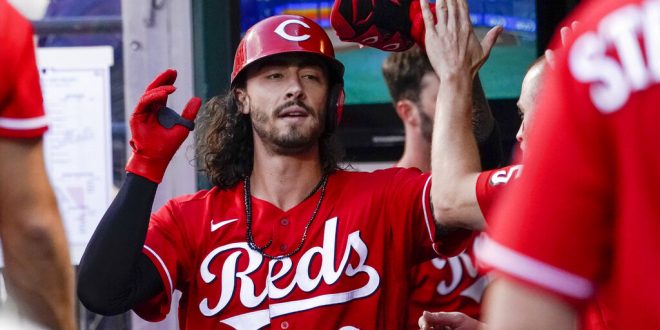 Cincinnati Reds' Jonathan India is congratulated by teammates in the dugout after his solo home run in the first inning of a baseball game against the New York Mets, Friday, July 30, 2021, in New York. (AP Photo/Mary Altaffer)

Former Gator Jonathan India is having an incredible MLB debut with the Cincinnati Reds. Since his first game in April, the Florida native has hit 11 home runs and knocked home 44 RBI. India also holds a .401 on-base percentage. His impressive performances just earned him National League Rookie of the Month. But Jonathan’s goals stretch beyond his personal accolades. “They don’t mean as much to me as the team,” says India. He hopes to lead the Reds to more wins this season.

The Reds are 56-51 on the season, good for second in the NL Central. India believes there is plenty of time to improve its ranking. “There’s still two months left. That’s a long time,” said India. He plans to play hard and finish his season off strong.

Jonathan India with the Gators

India’s work ethic has led him to the spotlight even before putting on a Reds jersey. He also left his legacy at Florida, playing for the Gators from 2016-2018. In his first season, he earned five freshman All-America honors. By his junior year, he was named a consensus First-Team All-American, ranking top 10 nationally for walks, home runs, slugging percentage, and total bases. He also became the third Gator in history to be named SEC Player of the Year, putting his name alongside Gator greats Matt LaPorta and Mike Zunino. India was selected by the Cincinnati Reds as the 5th overall pick in the 2018 MLB Draft, foregoing his senior season at Florida.

India spent three years in the Minors before debuting with the Reds, playing for the Greeneville Reds, Billings Mustangs, and Dayton Dragons. In April 2021, the Reds added India to the Roster as a second baseman. He hit his first home run in the Majors on April 22 against the Arizona Diamondbacks. With his professional career just taking off, there’s truly no limit on what the future holds for this former Gator.