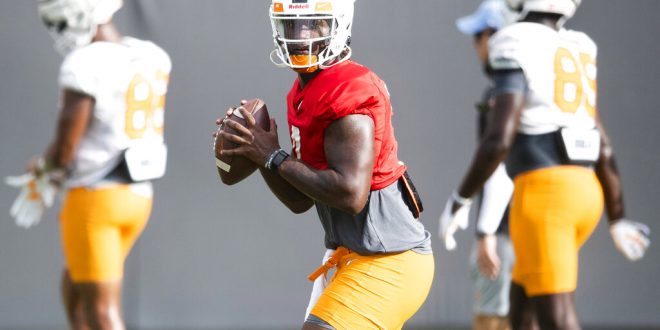 The Tennessee Volunteers kick off the SEC college football season with a matchup against Bowling Green Thursday night. The game ushers in a new era for Tennessee football, as it marks Josh Heupel’s first game as head coach.

The Vols finished their 2020 season with a 3-7 record and a fifth place finish in the SEC East. Soon after the season, the Vols fired their former head coach, Jeremy Pruitt, and nine other employees over a plethora of recruiting violations.

The Falcons have hopes for a better season, as well, after going 0-5 in their shortened season last year. They gave up 225 points over that five-game span, with a 42-17 loss to Buffalo being their tightest game of the season.

So, which team will get their season started on the right foot?

Two weeks after Pruitt’s departure from Tennessee, the Vols hired Danny White to be their new Athletic Director. He then made one of the more consequential moves of the offseason in going for Heupel to be his head coach.

Both come from UCF; White as the Athletic Director for six years and Heupel as the head coach for three years. Both are hoping they can bring some of the same success they gave the Knights to a Volunteers program that hasn’t seen consistent success since Butch Jones led the team.

Heupel said he’s embracing the opportunity to get started with his new team.

During his tenure at UCF, Heupel became known as one of the country’s best offensive coaches. He led the Knights to a 28-8 record in those three years, while his teams averaged 43 points per game.

Heupel recently named Michigan transfer Joe Milton III to be his first QB1 with the Vols. Milton transferred to Tennessee in April after beginning the 2020 season as a starter for the Wolverines before getting benched four games in.

He beat out Virginia Tech transfer Hendon Hooker and sophomore Harrison Bailey for the starting job.

Milton threw for 1,077 yards, four touchdowns and four interceptions in 2020. He joins an elite company of Drew Lock, Dillon Gabriel, and McKenzie Milton as a quarterback under the coaching of Josh Heupel.

Milton’s week-one opportunity couldn’t be much better, either, as he’ll face a Bowling Green defense that ranked No. 126 of 127 FBS teams last season. It will be interesting to see whether Heupel will kick off the season lighting up the scoreboard like he did in his years with UCF.

On the other side of the ball, the Falcons will be facing an uphill battle after struggling against opponents with far less talent than the Volunteers have.

Bowling Green is also one of the youngest teams in college football. Their roster features 71 players that graduated high school in either 2020 or 2021. That’s the third most of any team in the country.

This stat could be even more mind boggling – only 16 of their current players have started a game for the Falcons. Senior quarterback Matt McDonald will hope to lead his team to a major week one win in Rocky Top.

Kickoff at Neyland Stadium is scheduled for 8 p.m. The teams will clash in primetime on SEC Network.

I'm a third-year student at the University of Florida passionate about storytelling and sportswriting. My goal is to work in communications for a professional sports team after I graduate.
Previous Gators on the Road to Face No. 1 FSU
Next Alabama v Miami Game Preview