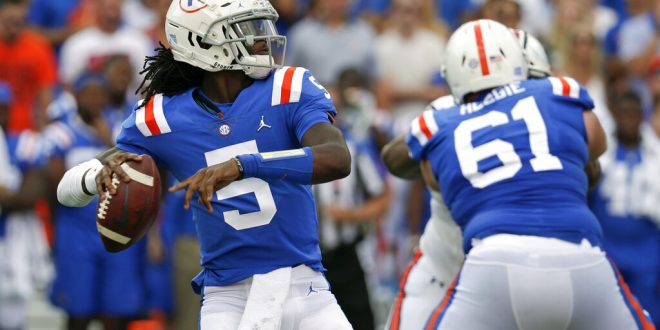 After more than eight months, Gators Football is back led by new starting quarterback Emory Jones. Florida kicks off the season hosting the FAU Owls in the swamp.

The New-Look Gators and Emory Jones

The Gators finished last season 8-4 and sent eight players to the NFL.

Looking to this season, redshirt junior Emory Jones will take over for the graduated Kyle Trask. Jones backed up Trask for two seasons.

Jones said he wakes up every day with the same approach to getting better.

Trevor Sikkema, host for PFF, said Florida has potential, but the problem is uncertainty.

The Florida Gators enter the season ranked 13th in the AP Poll, 11th in the Coaches Poll. That puts the Gators as the fourth-ranked SEC team out of four in the top-25.

The Gators finished the 2020 season as the number one passing offense in terms of passing yards per game. They were ninth for overall yards per game.

The FAU Owls finished the 2020 regular season 5-3 and lost to Memphis in the Montgomery Bowl.

FAU named a new starter for this year. N’kosi Perry, a graduate transfer from the University of Miami. FAU Coaches Show Host Frank Forte said Perry brings much experience to the team.

Forte said the team struggled last year on offense, especially in the passing game. He said the hope for the team is that “better quarterback play will elevate that offense.”

Gators coach Dan Mullen said he and the team are simply excited to get back on the field in the swamp.

Jensen Young is a journalism student at the University of Florida. He works as a sports writer for WRUF.com and is the voice of trendings on Wednesday mornings on the WRUF radio station.
@Jensen_Young9
Previous Gator Volleyball Hosts No. 10 Minnesota for Home Opener
Next Clemson vs. Georgia Shutdown