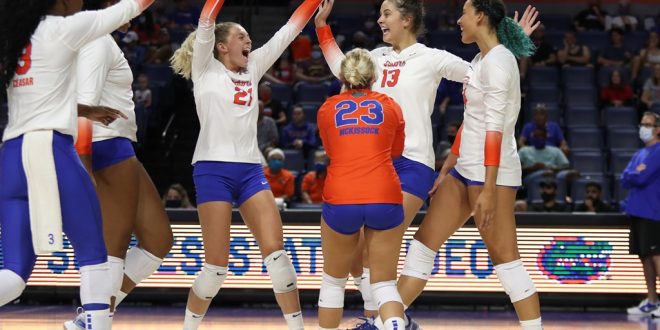 Scenes from the GatorsÕ Orange & Blue scrimmage on August 21, 2021. Photo by Courtney Culbreath

The Gators are back in Gainesville to open up the home season against the No. 10 Minnesota Golden Gophers at 2 PM this Sunday. Florida is 3-1 thus far in the season where they suffered their first loss earlier this week to No. 20 Stanford.

The Gators have presented a solid start to their 2021 season with players already on the SEC Conference leaderboard. Redshirt Senior Lauren Forte has started the season off strong with 22 kills so far this season putting her fourth in the conference with a .500% hitting percentage. Libero Eli McKissock and Setter Marlie Monserez are leading the team in digs both with 45.

The Gophers are 1-2 thus far in their season after a loss to Texas earlier this week. On the leaderboard, Stephanie Samedy has contributed 54 kills and 11 blocks, and 44 digs to this 2021 season. Setter Melani Staffmaster has been able to give her hitters 109 assists, while CC Mcgraw has picked up 46 digs for her team.

#Gophers fall to No. 1 Texas at the Pav. pic.twitter.com/TJFD3m1YRw

Due to COVID-19, SEC volleyball played a spring season schedule earlier in 2021 where teams competed against eight opponents, twice in the same week on back-to-back days. As a result, the Florida Gators had little to no off-season before preparation began for the fall of 2021. In addition, the NCAA delayed recruiting deadlines. Head Coach Wise said, “The hardest part was going 0 to 100 with recruiting. That was by far the most difficult.” Wise explained that there really was no break, especially for coaches.

First serve this Sunday is slated for 2 PM.

Parker Welch is a Senior at the University of Florida majoring in Sports Media at the College of Journalism & Communications.
@parkerrwelch
Previous Gator Soccer Falls to No. 1 Seminoles
Next Dan Mullen and more talk Emory Jones and UF vs. FAU