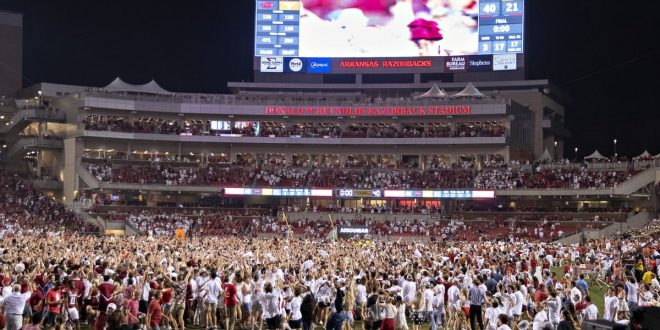 Mississippi State beat NC State by a pair of touchdowns at home. Bulldogs wideout Lideatrick Griffin immediately got the crowd on its feet after he took the opening kickoff 100 yards to the house.

In Greenville, N.C., the South Carolina Gamecocks erased an early 14-point deficit and beat ECU by a field goal. Following a 20-point loss to East Tennessee State in week one, Vanderbilt prevailed over Colorado State thanks to Joseph Bulovas’ last-minute field goal.

The kick is good!

Dores are back on top with 19 seconds left on the clock.#AnchorDown pic.twitter.com/L1ju2paClD

The Tennessee Volunteers, meanwhile, suffered the conference’s only week two loss in a 41-34 shootout against Pittsburgh in Knoxville, Tenn.

No. 1 Alabama and No. 2 Georgia remain atop the AP top 25 poll following blowout victories over Mercer and UAB respectively.

After managing a crunch-time, game-winning drive in Boulder, Colo., Texas A&M dropped two spots to No. 7.

The Florida Gators jumped two spots to No. 11 following a 42-20 away win over USF. Head coach Dan Mullen picked up his 100th-career win at UF.

After routing Austin Peay 54-17, the Ole Miss Rebels climbed three spots to No. 17. Meanwhile, Arkansas’ convincing win over Texas landed the Razorbacks at No. 20.

Arkansas is ranked in the AP Poll for the first time since 2016! pic.twitter.com/9kNwO4gkX2

Lastly, Auburn jumped three spots to No. 22 following its 62-0 beatdown on Alabama State. LSU (31) and Kentucky (13) are the only remaining SEC teams that received votes. The Tigers bounced back from a week one loss to UCLA by trouncing McNeese State 34-7 in their home opener. The Wildcats topped Mizzou by a touchdown in Lexington, Ky., in the first SEC East battle this season.

Top photos from our win in the @SEC opener ⤵️

Conference play will resume in week 3 as Nick Saban’s No. 1 Crimson Tide travel to Gainesville to face Dan Mullen’s Gators in the swamp. The clash will start at 3:30 p.m. on Saturday on CBS.

SEC East action continues this week as No. 2 Georgia gets set to host South Carolina Saturday at 7 p.m. on ESPN. Bulldogs quarterback JT Daniels remains questionable with an oblique injury. Daniels’ backup, senior Stetson Bennett. earned SEC co-offensive player of the week honors after he completed 10 of 12 passes for nearly 300 yards and five touchdowns against UAB.

Stetson Bennett is the 3rd FBS player over the last 15 years to record 3 pass TD of 60+ yards in a single half, joining Patrick Mahomes in 2016 and Casey Pachall in 2011.

Stetson Bennett has 5 pass TD today, tied for the most in a game in Georgia history. pic.twitter.com/I2hIhbUE78

After outscoring its first two opponents 122-10, the Auburn Tigers will head north for a reality check against No. 10 Penn State. The SEC-Big 10 showdown will begin at 7:30 p.m. Saturday on ABC after State College, Pa., hosts the site of College Gameday.

Hi, my name is Griffin Foll and I am currently a senior at UF studying sports media journalism with a concentration in political science. I contribute weekly web and radio content for WRUF ESPN Gainesville and help cover the World Cup/Champions League soccer beat. Be sure to check out some of my recent articles!
Previous NFL Week 1 Round Table
Next Monday Night Football Preview