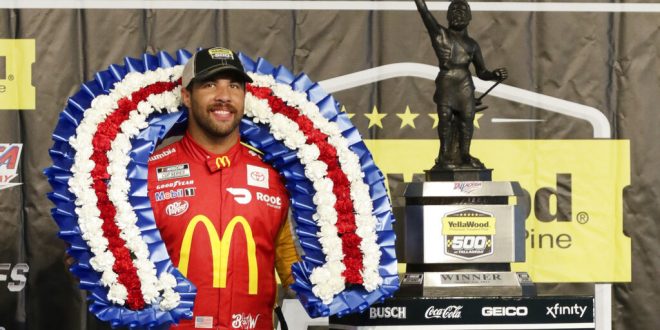 Bubba Wallace just earned his spot in the record books on Monday after a race at the Talladega Superspeedway. He steered through a rainy track to earn his first career cup win in 143 starts. But Wallace’s victory wasn’t one just for himself. He became the second ever black NASCAR driver to win a cup-level race.

A Race to Remember

The rain put a pause to racing on Monday afternoon in Alabama two times. After the first resumption, Wallace made his way to the front of the field and held the lead for five laps. Then, the sky opened up once again, forcing the race to end. Fortunately for Wallace and his crew, NASCAR decided not to reschedule and he was declared winner of the race. The last black NASCAR driver to win a cup race was Wendell Scott in 1963. Being the second person to show potential for the black community in NASCAR, Wallace sees a lot of value in his win for future generations.

Bubba Wallace is a member of the 23XI Racing team, owned by Denny Hamlin and Michael Jordan. The team launched this season with Wallace as their only driver. The one-car team flaunts a Toyota with No. 23, as a tribute to co-owner Michael Jordan’s NBA number.

Both owners were ecstatic about their team’s win. Jordan posted on Twitter saying, “I’m so happy for Bubba and our entire 23XI Racing team. This is a huge milestone and a historic win for us.” Hamlin was also excited, explaining how overwhelmed with emotions he was after the victory.

While Wallace and his team celebrate their historic victory, many online critics have expressed harsh feelings about it. Because of the shortened race, not everyone believes the win was well-deserved. However, Denny Hamlin has helped Wallace keep his head high and maintain focus on the people who support him.

Despite the hate, Wallace is proud of himself and his team for their victory. He appreciates how his team always perseveres and is excited to see what the future holds for them.

There’s no doubt that Wallace will continue to impact the black community positively as a race car driver. From his success in banning the Confederate Flag in NASCAR, to his success on the track, he has certainly earned his spot in the history books.