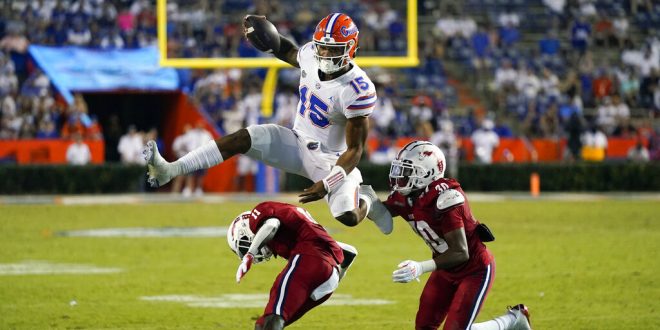 Anthony Richardson was back in action during Florida football’s practice Tuesday.

Richardson suffered a knee injury toward the end of last season causing him to miss Florida’s bowl game.

He played in eight games last season totaling 529 passing yards, 401 rushing yards and nine total touchdowns. The quarterback showed flashes of his potential, but was unable to take the starting job from Emory Jones due to inconsistency and nagging injuries.

Richardson started throwing drills in mid-February. He said he spent most of his off-season working on his lower body. The coaching staff was unsure when Richardson would return, but he said he pushed himself in rehab to get back as soon as possible. Richardson was cleared to practice on Monday.

While he may be a little bit behind his teammates, he joked that he’s glad he missed parts of head coach Billy Napier’s off-season program.

Richardson was referring to Phase Two of the Napier’s plan. The coach intends to build the team’s identity by placing them in situations of high adversity on the field.

Richardson also said that he’s seen the program go through a culture change since Napier took over.

Richardson is back. Jones is back.

Jones initially planned to transfer after Florida’s bowl game. However, Napier talked him into staying in Gainesville.

Jones and Richardson support each other on and off the field. When Jones entered the transfer portal, Richardson said the two talked. While Richardson did not suggest to Jones that he return to the Gators, he is glad he came back.

The two will probably be fighting for the starting position this fall.

Richardson is known for his athleticism. Defenders struggle to bring him to the ground.

The quarterback can dunk a basketball with the best of them and has been known to do a back flip during pregame warmups.

When asked which he would try first:

Trey is a third year sports media major at the University of Florida, and a WRUF reporter.
@@treyboogie5
Previous Gators Men’s Basketball host Iona in the First Round of the NIT Tournament
Next Gator Men’s Basketball Defeats Iona In the NIT