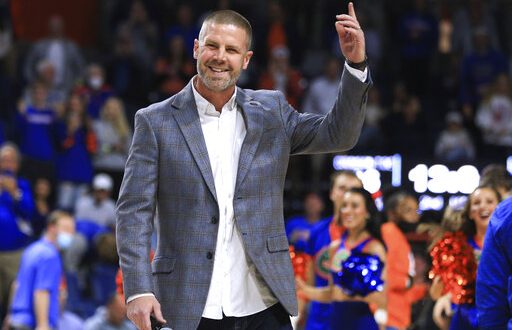 The Florida football team is wrapping up phase one of head coach Billy Napier’s eight-phase offseason program. And while the foundation for the Billy Napier era is officially laid, the program is transitioning to phase two: identity.

A look back at Phase 1

Starting on Friday, Florida football is transitioning from the first phase which was the “foundation” stage. Meanwhile, phase two of the year-round program will focus on building the team’s identity.

The foundation phase of Napier’s plan centers around recruiting and coaching staff hires. While the team has been busy physically during the offseason with weight-lifting, the program will now look to build more mental toughness.

Billy Napier on what to expect from Phase 2

On Friday, Napier explained to media what the program looks to accomplish throughout the identity phase of the offseason.

He further expanded on how the program is not based on evaluating physical talent or ability. Rather, the second phase plans to emphasize and instill self-discipline to give an opportunity for all players to develop.

In addition, Napier explained the specifics of the program and how the phase will build both physical and mental toughness.

As for what type of adversities players are set to face, he outlined instances such as receiving instructions, executing tasks at hand and playing with “fanatical effort.” Above all, Napier is looking to establish a team identity that sets the Florida program apart.

When asked what he envisions that identity to be, Napier expressed different qualities and traits he wants to develop in players.

The program will lead into spring practice and conclude with the Florida football spring game on April 16. Kick off for the Orange and Blue game will take place at 1 p.m.

Tori Edwards is a fourth-year Telecommunications student specializing in News with an outside concentration in Sport Management. Tori works as an author and reporter for WRUF.com and is the voice of trendings on Monday afternoons on ESPN 98.1 FM - 850 AM WRUF. You can reach Tori at victoriaedwards@ufl.edu.
@ToriEdwardsNews
Previous Arkansas v. Missouri preview
Next South Carolina v. Ole Miss preview