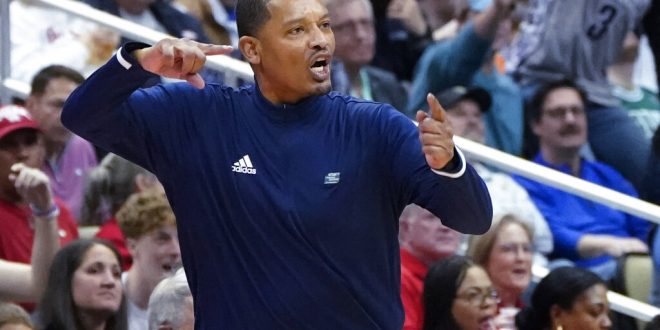 Chattanooga coach Lamont Paris gestures after the ball went out of bounds on a bad pass against Illinois during the second half of a college basketball game in the first round of the NCAA men's tournament Friday, March 18, 2022, in Pittsburgh. (AP Photo/Keith Srakocic)

The Gamecocks secured Paris on Monday after McMahon and Gates reached agreements with LSU and Missouri. Paris will replace Frank Martin, who spent 10 years at the South Carolina helm.

Martin, 55, was fired on March 14 after leading South Carolina to an 18-13 finish with a 9-9 SEC record in 2022. South Carolina and Martin parted ways after a decade with him at the helm.

“Our expectation is to compete for Southeastern Conference and national championships,” he said. “We will hire someone with a winning coaching history, who has the energy, passion and commitment to excellence in all areas of the student-athlete experience.”

Under Martin’s tenure, South Carolina amassed a 171-147 record with only one NCAA Tournament appearance in 2017.

During that sole postseason trip, the Gamecocks reached the Final Four after shocking 2-seed Duke in the second round and 3-seed Baylor in the Sweet 16. South Carolina rolled past Florida in the Elite Eight before falling to top-seed Gonzaga, 77-73, in the semifinals.

The deep run marked the Gamecocks’ best postseason performance in the program’s history.

Paris arrives at Columbia after finding recent success in Chattanooga.

In 2022, the Mocs posted a 27-8 record with a Southern Conference regular-season title and a SoCon conference tournament title. The Mocs also reached the NCAA tournament for the first time since 2016 but ultimately lost to 4-seed Illinois, 54-53, on Friday.

In five seasons at Chattanooga, Paris assembled an 87-72 record. However, most of those wins came in the last three seasons, where the team went 65-29.

Paris previously held assistant positions at Wooster and DePauw — both Division III programs — IUP, Akron and Wisconsin. He will now serve as the 33rd head coach in South Carolina’s history.