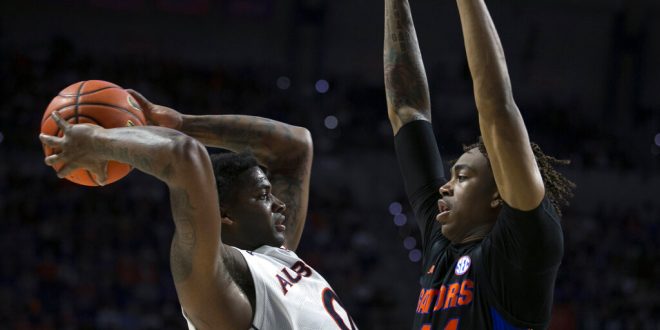 Despite not making the NCAA Tournament and having an early exit in the NIT Tournament, Gator basketball player Niels Lane is happy about the improvements he saw in his game and in his teammates.

The Gators finished last season with a 20-14 record, 9-9 in the SEC. After a second-round exit in the SEC tournament, the Gators missed the NCAA Tournament for the first time since 2016.

Niels Lane said the season was not a disappointment but more of a learning experience. For his game, he saw improvements as the season went on.

As he got more minutes over the season, Lane started to gain more confidence.

Lane averaged three points in 15.2 minutes per game last season. He got more playtime as the season went on and averaged 20.1 minutes against SEC opponents. Lane does not score a lot, but he is efficient. He posted the fourth-highest shooting percentage on the team at 53.3%.

The turning over of coaching staff can be difficult for players. The Gators hired Todd Golden to replace Mike White who left to coach Georgia. Lane said he is excited about Golden and for staying with the team going into next season.’

Lane will enter his junior season with the Gators.

He remembers choosing basketball in seventh grade as his main focus. He chose it over a sport few people would expect, fencing.

Lane feels that fencing has actually helped him in his basketball career, specifically on defense.

Much of the Gators roster is either a senior or fifth-year student, so Lane could see an increased role in Todd Golden’s new scheme.

Jensen Young is a journalism student at the University of Florida. He works as a sports writer for WRUF.com and is the voice of trendings on Wednesday mornings on the WRUF radio station.
@Jensen_Young9
Previous WWE WRESTLEMANIA 38 Preview: 4 Things You Need To Know
Next Arians steps down as Tampa Bay Buccaneers coach