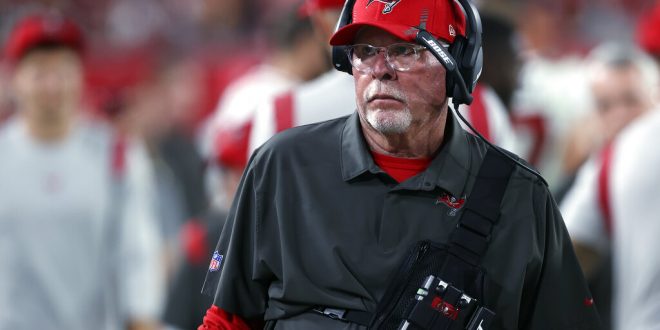 FILE - Tampa Bay Buccaneers coach Bruce Arians watches play against the Carolina Panthers during the second half of an NFL football game Jan. 9, 2022, in Tampa, Fla. Arians has decided to retire as coach of the Buccaneers and move into a front-office role with the team, it was announced Wednesday night, March 30. Arians, who will turn 70 this coming season, coached the Bucs to the Super Bowl title in the 2020 season — Tom Brady’s first with Tampa Bay. (AP Photo/Mark LoMoglio, File)

Bruce Arians, who led the Tampa Bay Buccaneers to its super bowl win in 2021, has stepped down as head coach. The official announcement was made by the team on Wednesday night, which saw Todd Bowles promoted as the new head coach.

Arians is not completely walking away from the Bucs. He will move to the front office as a Senior Football consultant. Reported by the Tampa Bay Buccaneers, Arians’ move is not related to health issues and he wants to leave Bowles in the optimal position for success.

Bruce Arians is transitioning to the front office as our Senior Football Consultant. Todd Bowles has been named head coach.

The announcement is the second retirement announcement from the Bucs this offseason, following Tom Brady’s. In February, Brady announced his decision to step away from the game to focus on his family. The decision became short-lived after the superstar announced just over a month later that he will return for a 23rd season to “take care of unfinished business.”

Arians began his time with the Bucs in 2019 to become their 12th coach in history. Prior to the Bucs, he coached the Arizona Cardinals. Arians began coaching in 1972 and now finishes his career with an 80-48-1 regular-season record (.624) and 6-3 in the postseason. After working for Cleveland, Pittsburgh and Indianapolis, he started to gain a reputation for his ability to develop quarterbacks. In 2012, and then again in 2014, Arians won the Associated Press NFL Coach of the Year award.

Thank you, Bruce, for all you have done for this franchise and our community. pic.twitter.com/e11Jk6cVPi

Bowles has worked with Tampa over the last three seasons. Previously their defensive coordinator, the Bucs credited Bowles’ ability as an instrumental part in their 2020 super bowl season run. This will be Bowles’ second gig as a head coach in the NFL. In 2015, he was hired as the New York Jets head coach. In his first season at the Jets, Bowles put up a 10-6 record. The team had previously finished with a 4-12 record for the season. Bowles left the Jets with an overall record of 24-40. His initial head coaching position came after working alongside Arians for the Cardinals in Arizona for two seasons. While working for the Cardinals, Bowles was named the Associated Press Assistant Coach of the Year in 2014.

During the last three seasons with Bowles as defensive coordinator, the Bucs allowed the fewest rushing yards in the NFL. Their defense also became third in super bowl history to hold its opponent without a touchdown. Bowles is now one of seven Black coaches to take a head coaching position with at least two different NFL institutions in their career.