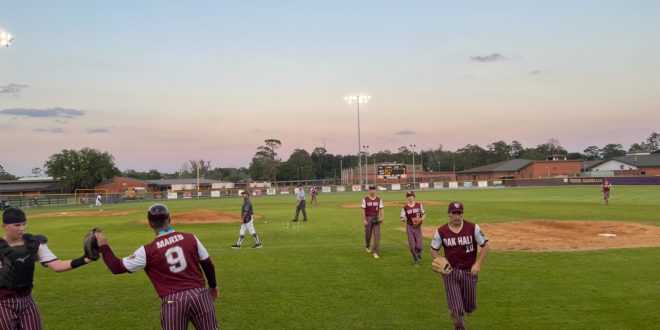 The Oak Hall Eagles came up short against the Union County Fightin’ Tigers in an 8-7 bout on Monday night. From a combined eight runs from both teams in the first inning to a walk-off on a wild pitch in extra innings, there were no dull moments in this one. The game also featured plenty of controversy, with a late-game ejection for the Tigers headlining Monday night’s drama.

Despite the eventful evening, the Eagles still put together a strong performance in the loss. Jack Kuzmicki and Neil Ruth both secured multiple hits on the day. Kuzmicki walked away with two RBIs, while Ruth drove in one run via a sacrifice fly. Ethan Szlachetka also helped the Eagles get on the board early with a 2-RBI double.

Falling Behind Early In The Evening

Both teams started off with a lot of activity on the offensive end. Jackson Beach was walked in his first at-bat, while Harrison Beach and Kuzmicki each hit singles. With the bases loaded, Szlachetka blasted one into the outfield to bring both Beaches home for an early 2-0 lead. Two at-bats later, Ruth hit a pop fly that brought Kuzmicki home.

Another strong start for the Eagles! With the bases loaded, Ethan Szlachetka knocks a double into right field to bring two runs home. The Eagles lead 3-0 midway through the first inning. pic.twitter.com/I6IyeV4W2k

While Oak Hall got off to a hot start, their momentum quickly came to a halt. The Eagles nearly ended the inning on a double play with no runs given up. However, the umpire called catcher’s interference on the play. Both outs were nullified, giving Union County a man on first and second.

The Tigers proceeded to drive five runs in the first inning, quickly taking control of the game. By the end of the second inning, the Tigers had grown their lead to 6-3. Head Coach Kevin Maris acknowledged the interference call as a turning point in the early innings.

“They wouldn’t have scored anything, we would’ve been out of the inning,” Maris said. “It was a fluke thing that happened, and oh well, but they went on to score [five] in that inning.”

The Eagles began chipping away at the Tigers’ lead in the third inning. Oak Hall picked up two outs to start the third inning. With the team needing a spark, Ruth knocked a ball into center field for a single. He went on to steal second base; an error from Union County allowed him to advance all the way to third. Brody Beaupre went on to hit a ground ball that brought Ruth home.

After keeping the Tigers off the board in the bottom of the third inning, the Eagles hit their stride as they returned to the plate. Aaron Akins was walked in the first at-bat of the fourth inning; Jackson Beach was hit by a pitch in the following at-bat. After a passed ball advanced both runners to second and third, Kuzmicki blasted a hard-hit ground ball into the outfield. Akins and Beach made it home with ease. The Eagles had tied the game.

Tie game! A well-hit ground ball by Jack Kuzmicki drives two runners in for the Eagles. The score is now 6-6 in the top of the fourth inning, as the Eagles look to further extend their lead with a runner on second and two out. pic.twitter.com/DnOcTvlkEr

Despite the Eagles trailing at the time of the play, Kuzmicki was not worried as he stepped to the plate. Noting how Szlachetka and Freeman follow him in the order, he expressed his confidence in his teammates’ abilities at the plate.

“Whatever happens, I’ve got two good hitters behind me and the rest of the lineup there,” Kuzmicki said. “Whether I get the hit or not, the job is going to get done.”

Soon after Kuzmicki tied the game, Freeman hit a short ground ball that Union County’s catcher attempted to scoop up. However, he struggled to corral the ball, and as Freeman passed through first base, Kuzmicki cruised through home plate. Within two innings, the Eagles had already overcome their deficit and took a 7-6 lead. Despite a rough start, the team quickly adjusted their play and corrected their earlier mistakes as the game went on.

“We just came out a little rusty, but we cleaned ourselves up… and we played good baseball,” Ruth said.

A Stalemate In The Later Innings

As Freeman took the mound at the start of the fourth inning, he had his work cut out for him. While Oak Hall had regained the lead, the margin of error for their defense was slim. The Tigers only needed one run to tie the game back up.

Another obstacle for the Eagles was the field’s oddly shaped pitching mound. The mound, shown in the tweet below, appeared to be significantly taller than the other mounds Oak Hall has pitched on this season.

After two innings, the Eagles are down 6-3. Oak Hall’s pitching has struggled adjusting to the height of Terry Stroemer Field’s mound (which appears to be abnormally high and is pictured here). pic.twitter.com/zzEXW1BVrT

Freeman noted that while he had to make minor adjustments to his pitches due to the mound’s height, he believes it did not hamper his play. “It changed up my style of pitching. I had to keep [my legs] more straight to keep it more aligned,” Freeman said. Other than that, I really just kept it all the same. I just threw to my target, I hit it and I thought I didn’t do bad.”

Freeman and the Eagles’ defense played extremely well in the middle innings of the game. Kuzmicki, Jackson Beach and Beaupre worked together to catch multiple Tigers runners in run-downs. One of those run-downs prevented Union County from tying the game in the sixth inning. Freeman’s pitching and the Eagles’ fielding kept the team in the driver’s seat for most of the game.

Despite a couple of scares on defense, the Eagles still lead 7-6 as we enter the seventh inning. After a Tigers runner was caught in a run-down while trying to make it home, Ethan Szlachetka caught a pop fly to finish the sixth inning. pic.twitter.com/8680RWIflI

Unfortunately, the Tigers kept Oak Hall off the board during this stretch as well. Between the fifth and seventh innings, the Eagles recorded only one hit and zero walks. With the offense struggling to escape their dry spell, the team entered the bottom of the seventh inning still holding on to a one-run lead.

A Finish As Chaotic As It Gets

The bottom of the inning started off normal enough. Freeman walked two batters, while one batter grounded out to second base and one hit a pop fly to center field. With two outs and a man on first and second, the stakes were high for both sides. This is where things began to go awry.

A Union County batter hit a hard ground ball into the outfield that allowed a runner to score for the Tigers. However, soon after the play, the Eagles objected that the runner had strayed from the base paths on his way home. Despite a lengthy discussion among the umpires, the call stood. After intentionally walking the following batter, Freeman put the inning away with a pop fly. The game was now going to extra innings.

Going Out With A (Literal) Bang

The Eagles failed to make it on base in the top of the eighth inning. All the Tigers needed to win now was one run in the bottom of the inning.

Up first to bat for Union County: catcher Blake Agner. With the count at 3-2, Agner knocked a well-hit ground ball to Jackson Beach that notched him a single. What happened next left the spectators in the stands baffled.

As Agner crossed first base, he ran over Szlachetka (the first baseman), sending him directly to the ground. The crowd immediately went wild, with Oak Hall supporters calling for the hit to be nullified and Union County supporters claiming Agner had made a legal play. Szlachetka said that while he was caught off guard by Agner, he does not believe it was a dirty play.

WOW. Controversy is abrewing tonight as Union County’s Blake Agner ran over first baseman Ethan Szlachetka following a line drive down the middle. Szlachetka was NOT in possession of the ball when the contact was made. The hit stands, but Agner was ejected from the game. pic.twitter.com/KU9zOuGFUu

“I was looking at Jackson, because he was fielding the ball. Then I saw myself flying in mid-air, and I felt myself hit the ground,” Szlachetka said. “I don’t believe it was an intentional hit… I think he was just trying to round the bag, honestly.”

The umpires immediately ejected Agner from the game, infuriating Union County’s first base coach. After another lengthy talk among the officiating crew, Agner was still disqualified from the game. However, his hit still counted, giving the Tigers a man on first with no outs.

It was all downhill from there for the Eagles. Another single and a fielder’s choice set the Tigers up with the bases loaded. Soon after, a passed ball allowed the runner on third to score. Game over.

Keeping Their Heads Up And Moving Forward

While Monday’s loss was a painful one, the Eagles were still pleased with their overall play against one of the better teams in the state. (The Tigers are currently a top 150 team in Florida according to MaxPreps.) They will look to bounce back this Wednesday at 4:15 p.m. when they will host the Saint Francis Catholic Wolves. Despite the loss, Head Coach Maris remains proud of his roster, and he is confident they will come back stronger than ever.

“At the end of the day, I thought the kids played outstanding,” Maris said. “It’s done and over with, and we’re moving on. We’re looking forward to the next game.”

Jack Meyer is a first-year student at the University of Florida. He is majoring in Journalism and specializing in Sports and Media.
@jackmeyerespn
Previous Billy Napier talks Florida Football spring camp
Next Kansas Jayhawks Stun UNC After Largest Comeback Ever in a Championship Game