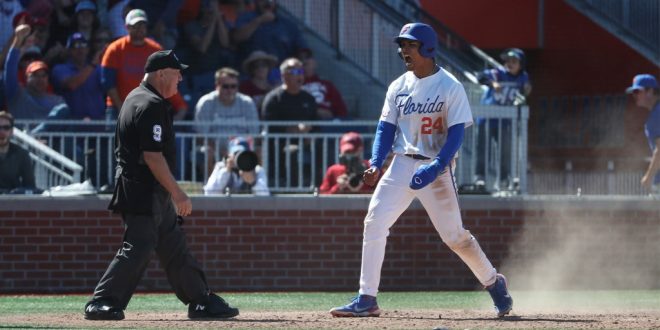 Florida baseball took a huge series victory over the weekend against the No. 2 Arkansas Razorbacks. Surely, Florida used a 13-hit effort backed by an offensive run from Wyatt Langford and BT Riopelle to clinch the series. Then, the Gators effectively brought an end to the Razorbacks’ conference-leading streak of 13-straight SEC series victories.

Blake Purnell was a key factor in Florida capturing the series over the Razorbacks. Certainly, The redshirt freshman has proven himself to be a valuable relief pitcher, tossing six innings in his three appearances. Head coach Kevin O’Sullivan speaks about Purnell’s development.

The Hogs, who still sit in first place in the SEC West standings, will look to get back on track. Now, Arkansas will be hosting five games this week, two against UAPB and the rest against LSU. Next, Florida will be competing against Florida State and Vanderbilt this week.

The No. 8 Rebels were swept by Alabama on Sunday in a 7-3 loss. Critically, 2022 is the first time Ole Miss has been swept in two home series since 1997. Even further, Alabama has won eight of its past nine games and is on a season-long six-game win streak. Junior right-hander Garrett McMillan allowed only three hits and three walks while striking out seven in seven innings.

Ole Miss returns home on Tuesday against Murray State and resume SEC play on Thursday against South Carolina. Alabama will host Belmont on Tuesday before going back on the road to face No. 1 Tennessee.

While Mississippi State has struggled in conference play, the Bulldogs were always able to win one game per series. However, LSU finished off a series sweep of MSU at Dudy Noble Field. LSU clinched its ninth straight series win against Mississippi State, improving to 22-9 overall and 6-5 in the SEC. LSU outfielder Josh Pearson went 5 for 11 at the plate, including two homers for six RBIs.

The Tigers will be hosting Lamar University this Tuesday before hitting the road on Thursday to play the Arkansas Razorbacks. The Bulldogs will be home all week as they take on UAB Tuesday and Auburn Thursday.

Kentucky continues to struggle in SEC play as they dropped two out of three games to Texas A&M. Texas A&M took the series opener Thursday, and Kentucky bounced back for a win Friday. However, the Aggies’ offense exploded to win Saturday. Texas A&M Outfielder Dylan Rock finished 2 for 3 with four RBIs on the day.

Next weekend, Kentucky will be back on the road for a three-game series at Missouri. The Aggies travel to Corpus Christi to take on A&M-Corpus Christi on Tuesday.

The Gamecocks drop their third SEC series with Sunday’s loss to No. 14 Georgia. Georgia had five runs in the top of the first inning to grab a dominant lead it never surrendered. Georgia’s Chaney Rogers notched five RBIs and the Bulldogs’ baseball team won its third SEC series of the season.

Carolina continues its homestand on Tuesday night against North Florida. The No. 14-ranked Bulldogs will be back in action at Kennesaw State at 7 p.m. on Tuesday.

Vanderbilt baseball showed flashes of what it’s supposed to be, but the Auburn Tigers clinched the series. The Commodores haven’t been able to find any consistency throughout SEC play. Auburn’s first baseman Sonny DiChiara was 3-5, with two home runs, a double, and 5 RBIs. Auburn now sits at 2nd in the SEC West, 1 game behind Arkansas.

Your @SEC Player of the Week and the @NCAABaseball leader in:

Auburn takes on in-state foe Samford at Plainsman park on Tuesday. Vanderbilt hasn’t lost three consecutive SEC series since 2018 and will need to avoid making it a fourth against Florida this weekend.

The No. 1 Tennessee Vols completed the sweep over the Missouri Tigers. With the win, Tennessee becomes the only team to have the best start to SEC play of all-time with a 12-0 record. The Vols hit eight homers in the series, including Jordan Beck’s grand slam Saturday.

UT is one win away from tying the longest winning streak in history among SEC teams, as the Vols hit the road to face Tennessee Tech. Missouri will be hosting all week as they play Western Illinois this Tuesday and Kentucky on Thursday.