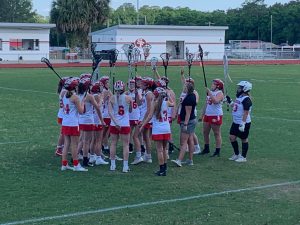 The Santa Fe girls lacrosse team has a matchup scheduled on Monday night to continue their journey to win the district championship. The game is against Gainesville High, a team they have faced twice this year already. The match will begin at 5:30 p.m.

The playoffs come at a fantastic time for the Raiders, as they ride a hot streak coming into this game. Santa Fe has been victorious in four of their last five games, one of those victories coming against their opponent, Gainesville High. Luckily for Santa Fe, the Gainesville Hurricanes cannot say the same for themselves. Coming into this matchup, the Hurricanes have lost three in a row.

Experience Has Been on the Raiders Side All Season

A big part of Santa Fe’s success is due to its veteran leadership on the field. A majority of the team is juniors and seniors who help the team succeed on and off the field. Although the goalie of the team, Meagan Wisener, is only a sophomore, she has performed well this season with the help of her teammates. Compared to Gainesville High, they have much older girls on the field which could help them during crunch time of the playoffs.

How Did These Teams Perform This Season?

This season, the Raiders have played the Hurricanes two different times, once in April and once in February. In February, Gainesville high won by a score of 12-9, while Santa Fe came for revenge in April, winning 20-15. Aside from their direct matchups, the Raiders have the advantage record-wise, sitting at 9-4 compared to Gainesville’s 5-8 record. Based on their records and schedules, Santa Fe has surely performed better this season and is expecting to move on after Monday’s face-off. If Gainesville is going to pull off the upset, the girls will have to reciprocate their February game with teamwork and determination.

Previous Heat look ahead to playoffs
Next SEC Baseball Roundup