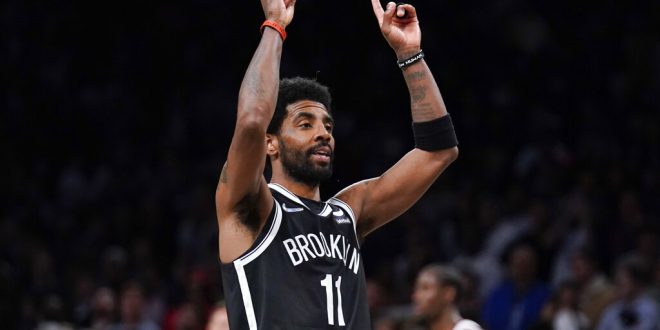 Brooklyn Nets' Kyrie Irving reacts after sinking a basket during the second half of the opening basketball game of the NBA play-in tournament against the Cleveland Cavaliers, Tuesday, April 12, 2022, in New York. (AP Photo/Seth Wenig)

Brooklyn Nets Clinched No. 7 Seed to Advance to Playoffs

On Tuesday night, the Brooklyn Nets beat the Cleveland Cavaliers 115-108 in a play-in game to take the No. 7 seed in the Eastern Conference.

In the first quarter, the Nets came in hot.

Irving quickly gained possession of the ball and showed he was a force to be reckoned with. He scored the first points in the game with a driving layup. With 10:35 left of the quarter, Irving set up teammate Drummond for a dunk, 4-0. He proceeded to assist Brown in a layup, 6-2. At 5:09 left of the quarter, the Nets starts to pull away with a big lead, 19-13. Throughout the first quarter, the Nets never trailed, and at the end of regulation they lead by 20 points with a score of 40-20.

While Brooklyn racked up the points, it failed to stop Cleveland without fouling in the first quarter.

Leaders for the Nets were Irving, Durant, Brown and Drummond.

Irving made 34 points and 12 assists during the game. He also finished 12 for 15 of his field goals. The one shot Irving missed was a three-pointer that bounced off the rim in the fourth quarter. Durant also led the team with 25 points and 11 assists. Both scoring leaders wanted their teammates to add to the game and aided in Brown and Drummond scoring more points. Brown had 18 points and led the team with nine rebounds. Drummond scored 16 points for the Nets.

The last few points scored for Brooklyn were made by Irving when he went up and was two-for-two at the foul line, 115-108.

The Cavaliers scrambled throughout the game to put up points to catch up to the Nets. They were unable to take the lead due to Brooklyn gaining possession after most of the shots taken by both teams. Cleveland only caught 40 rebounds, while Brooklyn caught 43.

Darius Garland scored 34 points and made 13 out of 24 shots . The next top scorer for Cleveland was rookie Evan Mobley. He scored 19 points and went nine for 13.

One reason the Cavaliers did not do as well as they hoped for is because of injuries. Center Jarrett Allen broke his finger on March 6 and missed 18 games. Fans hoped for his return in the play-in game, but he did not return to the court.

After the win against the Cavaliers, the Nets move on to play on Sunday against the Boston Celtics at 3:30 in game one of the NBA Playoffs.

While the Cavaliers will play in another play-in game for the No. 8 seed. They will host the winner of the Atlanta versus Charlotte game on Friday and whichever wins that game will play No. 1 Miami in the playoffs.

It all comes down to Friday night.

Be here to #LetEmKnow during our home Cavs Play-In Game, driven by @goodyear!