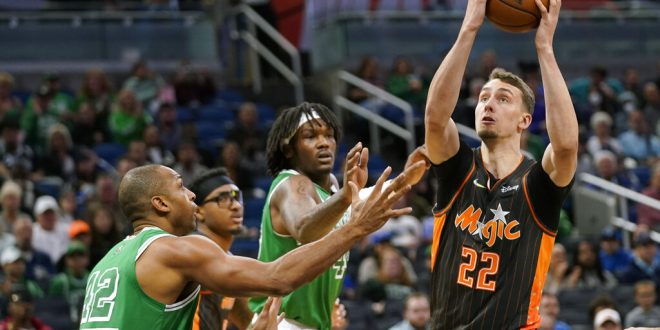 Orlando Magic forward Franz Wagner (22) goes up for a shot against Boston Celtics' Robert Williams, center and Al Horford (42) during the first half of an NBA basketball game, Sunday, Feb. 6, 2022, in Orlando, Fla. (AP Photo/John Raoux)

Magic Blown Out By Celtics at Home

The Orlando Magic were handled by the Boston Celtics Sunday, as they lost by a score of 116-83.

Orlando’s struggling offense saw them fall behind Boston early in the game. The Magic never held the lead, and the deficit got worse as the game went on. By the end of the game, Orlando saw no time left on the clock and a 33-point disparity.

Positives of the Game

While the list of successes for the Magic may not be extensive, the home team did manage to do a few things well. At the top of that list was holding star forward Jayson Tatum to only 15 points. Tatum is averaging 25.6 points per game on the year. If he catches fire, the Celtics are a tough team to beat.

Orlando also managed to slow the Celtics down early in the game. In the low-scoring first quarter, the Magic only allowed 21 points. By half time, the team was down by a manageable 10 points and saw a 49-39 game.

Jalen Suggs was the main bright spot for the now 12-43 Magic. He showed up offensively and defensively and put up when of his better games of the year. He ended the match with 17 points, six rebounds, five assists and three steals.

The defense even forced 16 turnovers. They couldn’t take advantage of these Boston errors, but they were making their presence known, especially in the earlier parts of the game.

While the game wasn’t all bad for the Magic, the outcome was far from what they hoping. Perhaps the biggest issue of the game was the Celtics’ 13 3-pointers. The team only shot 28.3% from the arc, but the volume made a big difference in the final score.

Orlando also had trouble rebounding all night. The Magic had 15 less rebounds than the road team and gave up 16 offensive rebounds.

The home team couldn’t buy a bucket. The Magic shot 35.8% from the field and 19.2% from behind the arc. They were only able to tally 63 points from the field compared to the Celtics’ 103. The team’s poor shooting made it even harder to overcome its 19 turnovers. This has been a trend for Orlando all year, as they are averaging 14.6 turnovers per game.

With the starters struggling as much as they did, the Magic’s bench could have been a real difference-maker. However, Orlando’s bench was outscored 41-23. One of the key players on Boston’s bench unit was Dennis Schroder. The guard accounted for 22 of the bench’s 41 points and shot an efficient 4/8 from the three-point line. Star forward Jaylen Brown also had a great game, putting up 26 points on the offensive end and tallying three steals on the defensive side.

This was the third and final game of the series between the two teams. Now, Orlando will put the Celtics behind them and focus on trying to close out the season strong. The team currently has the worst record in the league, but it could see some improvement in its young players over the rest of the year.

Orlando now has a tough four-game road stretch ahead, including games against Portland, Utah, Phoenix and Denver. With three of those teams currently in the top six seeds in the Western Conference, the competition will be tough.

If the Magic can win the first game against the Trailblazers, they may be able to gain some momentum for the road stretch ahead. They will play Portland at 10 p.m. on Tuesday.

Previous National Signing Day for Gainesville Hurricanes
Next Is the Big 3 Dynasty Over in LA? 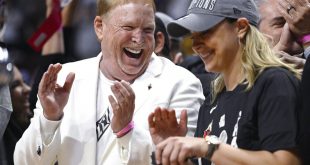