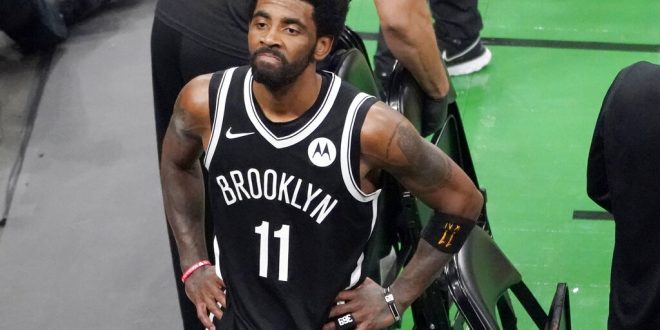 FILE - Brooklyn Nets guard Kyrie Irving looks up at the fans at TD Garden after they defeated the Boston Celtics in Game 4 during an NBA basketball first-round playoff series in Boston, in this Sunday, May 30, 2021, file photo. The Brooklyn Nets won't play Kyrie Irving until he can play in all their games, unwilling to let questions about his vaccination status linger into the season. The Nets announced Tuesday, Oct. 12, 2021, that Irving would not play or practice with them until he could be a full participant, ending the idea that he would play in only road games. Without mentioning his vaccination status, general manager Sean Marks said Irving has made a decision that keeps him from being able to perform with the team. (AP Photo/Elise Amendola, File)

Brooklyn Nets point guard Kyrie Irving opted to not receive the COVID-19 vaccine. On Tuesday, Nets General Manager Sean Marks announced Irving is ineligible to practice or play in a game until he is vaccinated.

The NBA champion said the organization is using him as an example.

“I am not going to be used as some tool to further this agenda,” the six-foot-two star said on Instagram live. Irving said he feels blindsided.

The Duke alumnus said people need to pay attention to the real world, he’s just a ‘hooper.’ Irving said he needed to stand up for his beliefs.

New York City holds its own vaccine mandate, which prompted the Nets’ decision to require at least one dose to play.

In order to play in the Barclays Center, the reality is he’d need to side with the mandate, he said.

“I chose to be unvaccinated and that was my choice. I would ask y’all just to respect my choice,” he said.

Head coach Steve Nash said the loss of his star point guard was a difficult yet sound decision. Though Irving said he’s not going anywhere.

But Irving claims the financial aspect is not a determining factor.

“It’s not always about the money, it’s about choosing what’s best for you,” he said. “You think I really want to lose money?”

Irving’s decision broke the internet and Twitter exploded after the news broke. Many started to compare the basketball star to Muhammad Ali.

During an Instagram live, Irving said he’s entitled to his own opinion on the vaccine, but he respects others decisions. While it is unclear what will happen moving forward, No. 11 is adamant about not receiving the vaccine.