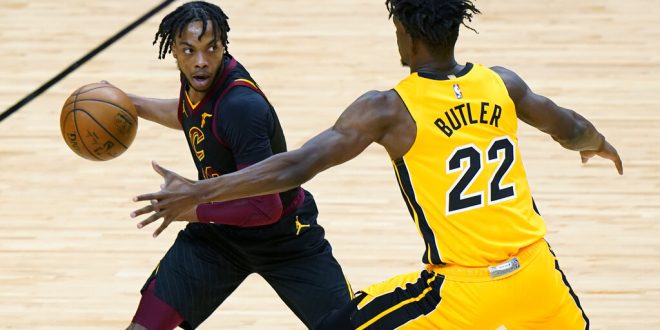 In addition, the Heat’s win gives them 19 straight victories over the Cavs in Miami.

19 STRAIGHT WINS OVER CLEVELAND IN MIAMI

Heating Up in Miami

After a slow start to the season, Miami is looking like the team that made a championship run last season.

The Heat’s starting five had an impressive night, each scoring in the double digits.

Butler put at least 27 points for the seventh straight game with his 28 points and 12 rebounds. Miami forward Kelly Olynyk put up 17 points and eight rebounds for the Heat.

In his first appearance since March 2, Bam Adebayo dropped 14 points and posted nine rebounds along with six assists. After being listed as questionable against the Cavs, Adebayo played through an injury to his left knee. In his fourth season in the league, Adebayo is posting some of his best numbers averaging 19.1 points per game.

Miami’s Kendrick Nunn posted 10 points and five rebounds for the Heat. Duncan Robinson added another 14 points and Tyler Herro came off the bench to score 15.

The Cavaliers’ leading scorer Collin Sexton put up 21 points against Miami. The guard out of Alabama is averaging 23.6 points per game for the Cavs.

JaVale McGee came off the bench to put up 16 points and eight rebounds for Cleveland. McGee went 8-10 from the field and was a near-perfect 7-7 from the field through the first three quarters.

Up Next for Miami

The Heat sit at fourth in the Eastern Conference just behind the Milwaukee Bucks, Brooklyn Nets and the Philadelphia 76ers. Miami returns to the court on Wednesday night on the road against the Memphis Grizzlies.