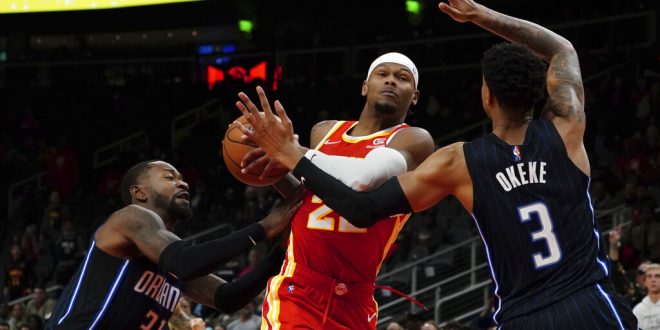 The Magic put up a tough fight through the first half of the game. Wendell Carter Jr. had a perfect field goal percentage for a total of 13 points. He scored 10 points within the opening seven minutes of the game, putting the Magic up by one after the first quarter. Carter Jr. hit a three-pointer at the beginning of the second, but the Hawks came back to lead 60-56 at halftime.

Wendell Carter Jr. at the half:

Additionally, Cole Anthony and Franz Wagner put up big points to give the Magic the best chance at a victory. Anthony scored a game high of 29 points. He also led with 11 assists to extend his career best. This was Anthony’s third double-double of the season. Wagner was the second-highest scorer for the Magic, shooting 50% from the field for 19 points.

*11 AST was a career-high pic.twitter.com/1haNVIhUVB

Although the Magic had strong shooters, they couldn’t maintain a lead on the Hawks. Orlando was unable to chip away from Atlanta’s double-digit lead through the final nine minutes of the game.

With a home-court advantage, the Hawks did a great job at defending their territory. Trae Young and John Collins put up 23 points each. This was an impressive feat for the 6’1″ Young, who had to push past 6’10” Wagner,  who guarded him most of the game. Young addressed the challenge of having bigger players guarding him in a post-game press conference.

“Coaches like to put bigger guys on me to be more physical. If that’s what they think can work, I obviously encourage them to keep doing it.”

Trae Young on bigger players, like Franz Wagner tonight, guarding him in games: “Coaches like to put bigger guys on me to be more physical. If that’s what they think can work, I obviously encourage them to keep doing it.”

The Hawks also had Clint Capela and Bogdan Bogdanovic put up 20 points each. The plethora of high-point scorers for the Hawks is a testament to the weak defense played by the Magic. Orlando coach Jamahl Mosley said his team needs to do a better job guarding.

“We talk about shots are going to be made and missed, but we have to hang our hat on the defensive end — 129 is not what we’re looking for. We want to make sure we sit down and guard, physically keep them off the glass,” Mosley said.

The Hawks had a four-point lead at halftime and stayed ahead of the Magic for the remainder of the game.

Orlando and Atlanta will play their next games on Wednesday. The Magic will head to New York to play the Knicks. Meanwhile, the Hawks will stay at home to welcome the Boston Celtics.