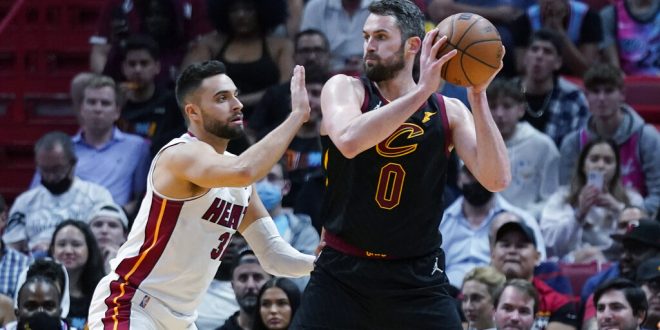 The Miami Heat dropped to 13-9 on the season as they fell to the Cleveland Cavaliers last night, 111-85. The Cavaliers have now won three straight games as they improved to 12-10 on the season.

A big reason the Heat lost a second consecutive home game was the lack of big man Bam Adebayo. Miami announced on Wednesday that Adebayo suffered a torn UCL in his right thumb in the team’s Monday night loss to the Denver Nuggets. The All-Star center is set to undergo surgery on Sunday to repair that tear and will be sidelined for up to six weeks. The Heat’s other All-Star, Jimmy Butler was also out with a bruised tailbone. The rest of the roster struggled to perform. Tyler Herro added the most output on offense, scoring a team-high 21 points.

Multiple streaks were snapped with the Cavs’ win over the Heat. For Cleveland, it was their first win in Miami since January 2010, snapping a 20-game losing streak when playing on the road in South Beach. Miami’s Duncan Robinson also had a streak snapped. His franchise record of 69 consecutive games with a 3-pointer ended as he went 0-for-6 from behind the arc. The rest of his stat-line wasn’t the most encouraging either, as he only registered one steal in 20 minutes of play.

The streak is dead! #LetEmKnow

Cavs Have to Love It

The Cavs put in a balanced attack in their victory over Miami. Cleveland had six players reach double-digits and Kevin Love posted a monster stat-line of 22 points, 6 rebounds, 3 assists, 2 steals, and 1 block, while also draining six 3-pointers in just 21 minutes of action. Jarrett Allen and rookie Evan Mobley each posted double-doubles as they bullied the Heat on the glass. With Collin Sexton out for the season, the Cavs have handed the keys to the offense to Darius Garland. The point guard added 16 points and 7 assists on the night.

For Miami, they will try to bounce back on the road as they take on a 9-15 Indiana Pacers squad that sits near the bottom of the Eastern Conference. The Heat-Pacers matchup tips off tomorrow night at 7 p.m. Meanwhile, the Cavs will aim to extend their winning streak as they continue their road trip against the Washington Wizards. Washington sits in second place in the East with a 14-8 record. The Cavs-Wizards matchup also tips off tomorrow night at 7 p.m.