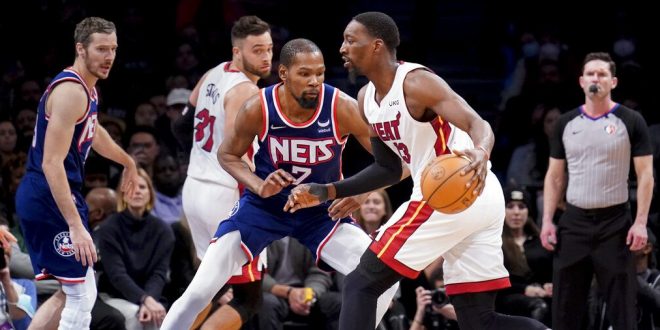 Kevin Durant returned to the court Thursday night after a 1 1/2 month absence with injury, but Bam Adebayo and the Miami Heat stole the spotlight in their 113-107 win over the Brooklyn Nets. Adebayo put up 30 points, 11 rebounds and six assists for the Eastern Conference-leading Heat. Although it wasn’t enough for the win, Durant shone in his return to action, scoring 31 points in his first game since Jan. 15.

The Nets led by as many as 16 points early in the contest but then only put up 40 points in the second half. The Heat played lockdown defense in the half and held off a late surge to earn their 42nd win of the season.

With the loss, the Nets drop to an even 32-32 and sit at eighth in the Eastern Conference as of Friday morning. Brooklyn went 5-16 without Durant, dropping all the way from second place in the conference. Only the Knicks and Rockets have been worse over that span.

Even with Durant Thursday night, the Nets were still missing some pieces. Kyrie Irving was out due to it being a home game and Ben Simmons continues to rehab an injury with a return to action not yet set.

The Heat came into the game trying to bounce back from a last-second loss to the Milwaukee Bucks the day before. The Nets were in a similar situation, having lost by a single point to the Toronto Raptors on Tuesday.

Brooklyn has now lost five of their last six games. But what went wrong on Thursday, and how did the Nets fall short?

Durant and the Nets led 35-23 after the first quarter and 67-60 at halftime. Heat head coach Eric Spoelstra adjusted in the second half, though, and the Nets weren’t able to recover. Spoelstra switched over to zone defense, and the Heat held the Nets to 17 points in the third quarter on 6-for-28 shooting. Miami gained an 88-84 lead to cap off the quarter and never looked back.

On offense it was Bam surrounded by shooters, on defense it was zone.@CoupNBA has the Takeaways on how it all came together for a big bounce back win in Brooklyn ⬇️

The Nets made a late push to try to steal the win but fell short to drop to .500 on the year.

Goran Dragic made his first start for the Nets against his former team and scored 9 points in 25 minutes. He had a unique perspective on Spoelstra’s coaching in the second half.

“Spo tricks us with that zone,” Dragic said. “They really played well the zone. We kind of lost the pace of the game.”

The Nets played their third straight game without head coach Steve Nash, who entered health and safety protocols on Monday. Simmons is rehabbing a back injury and tweaked it trying to build up his conditioning in a return to the court.

Up next, the Heat will face the 76ers, and the Nets will take on the Celtics.

I'm a third-year student at the University of Florida passionate about storytelling and sportswriting. My goal is to work in communications for a professional sports team after I graduate.
Previous Bolts Win Streak Snapped
Next Gators Gymnastics takes on Auburn