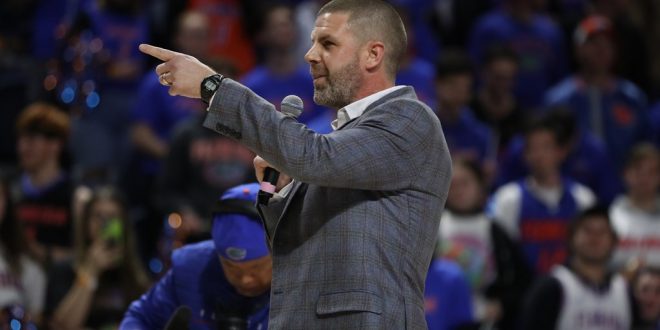 The event was hosted by the Gator Boosters and presented by the Fighting Gator Touchdown Club. Taking place at Holloway Touchdown Terrace was the last of nine dates on Coach Napier’s tour. At each stop, the coach treated Boosters and fans alike to stories about his family, his career, and his plans at the University of Florida. The Gainesville crowd, however, received a bonus visit from new men’s basketball coach Todd Golden.

During the event, Coach Golden elaborated on the hiring of Taurean Green, and Coach Napier spoke about his eight-phase plan. Read on for more highlights from the event.

A Few Words from Coach Golden

Golden started the evening by speaking about his background in basketball, leading with his decision to attend Saint Mary’s College to play for the team:

“My stubborn 17-year-old self cancelled the visit to Columbia and committed to walk-on at Saint Mary’s College. And I know my parents were not very proud of me in that moment. But I’m here with you guys today, so it worked out alright.”

He went on to discuss his experiences over the years, beginning with playing professionally in Israel.

Golden then quipped about his first day at University of San Francisco, where former head coach Kyle Smith warned him about the West Coast Conference’s hiring history:

Before moving on to the Q&A, Golden finished up with some remarks about coming to Florida:

“I never anticipated getting the opportunity…I was very honest with [Scott Stricklin], I said, ‘I want to be here with you. If I can have the opportunity to run your program, I won’t talk to anybody else, we’ll shut it down, and we’ll come to Gainesville.”

Golden’s Thoughts on the Gators

One of the first questions asked of Coach Golden was about Jason Jitoboh, the Gators’ center who underwent eye surgery in January. Here, Golden elaborates on Jitoboh’s status:

When asked how he would turn around the issue of rebounding, Coach Golden simply replied, “Coaching,” receiving loud laughter from attendees. He quickly clarified, “I did not mean that in an offensive way!” and continued his answer:

Towards the end of the session, an attendee asked about the recent hiring of former Gator Taurean Green. Coach Golden said one of the main reasons for bringing Green on was to restore some passion to the program:

Ultimately, when Golden spoke to Green, he knew it was a done deal:

Napier in the Building

As Coach Golden wrapped up his Q&A session, heads began to turn to the back of the room: the man of the hour had arrived.

Coach Billy Napier made his way toward the stage, and after a short video played, he began his much-anticipated speech. He spoke about his family first, giving thanks to his wife Ali and then showing a photograph of his three kids.

“I’m very thankful for my wife Ali. She’s incredible. Wouldn’t be standing up here without her…so when you see me, just remember: that’s the real boss, okay?” – Napier, on his wife of 14 years.

After confirming that he did, in fact, buy a house in Gainesville, Coach Napier showed a photo of his extended family. The photo included his late father, who coached 19 high school football players that went on to play college ball.

Billy Napier’s father passed away in 2017 due to ALS. Coach Napier talked about the difficulty that comes with an illness like ALS, and his father’s words to him.

Coach Napier said that as time went on, it became harder to cope with the situation. “[My father] could tell that it was getting to me…It’s killing me. I’m just not the same guy.”

After some words about his family, Coach Billy Napier walked through his several years in various positions on college football staffs: Clemson, Alabama, and finally, Louisiana. Napier recalled his third year at Clemson when Dabo Swinney promoted him to offensive coordinator and joked about his age at the time:

Later, Coach Napier showed a photo of himself with Levi Lewis, former quarterback for the Louisiana Ragin’ Cajuns. “Phenomenal person. Unbelievable leader,” Napier said about Lewis. “Very rarely in your career do you coach a player that you would say ‘that guy impacted me just as much as I impacted him.’…That guy right there is unbelievable…that’s why you coach.”

The coach then joked about Louisiana being picked to finish last in the league – throwing in a quip about Paul Finebaum:

Napier’s Plan for the Gators

Following the slideshow of his family and career, Napier dove into his desires for the Florida football program and began taking questions from the crowd. He talked briefly about some of the opportunities he’s attempting to create for players off the field.

The coach then said the team has just begun its summer training regimen:

It wasn’t long before someone asked after Anthony Richardson and his recent speeding ticket. Coach Napier was quick to set the record straight. He vouched for Richardson’s character, then explained the situation: Richardson had attended an event out of town and fell asleep, panicking when he woke up early the next morning.

After taking a few more questions, Eric Cavanaugh of the FGTC wrapped up the event by presenting Coach Napier with a check. Before stepping off the stage, Coach Napier left the crowd with a familiar phrase:

“[Mike Peterson] told me… he said ‘Hey Coach, when they say ‘Go Gators’ to you, you say ‘Go Gators’ back.’ I said ‘Alright Mike, yes sir!’…so why don’t we finish with a little Go Gators?”

The crowd was all too happy to oblige.

Sophie is a telecommunications major graduating in Summer 2022. She works as a host & Edutainer at ITProTV, and as a student producer, writer, voice, & sports coordinator for ESPN Gainesville. She is also a voice actor independently for various clients on a national level.
@SophieGoodwinUF
Previous Golden gives update on Castleton, Jitoboh injury recoveries
Next Gator Baseball to Host NCAA Regional