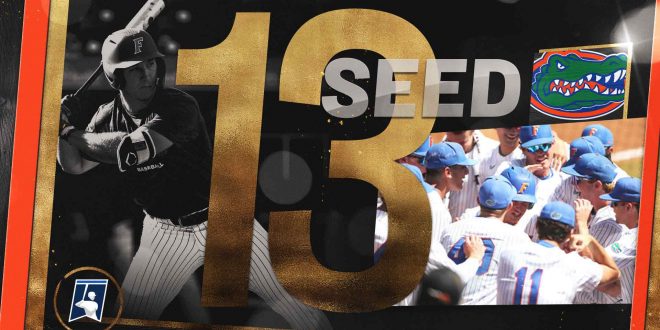 After reaching the championship game in the SEC tournament, the Florida Gators are set to host the Gainesville Regional in the NCAA tournament. The Gator baseball team will host No. 2-seed Oklahoma, No. 3-seed Liberty, and No. 4-seed Central Michigan.

Gator Baseball is hitting its stride

The Gators earned the No. 13 seed nationally following their strong run in the SEC tournament where they went 4-2. The Gators picked up wins against No. 10-seed South Carolina, No. 3-seed Arkansas, No. 11-seed Alabama, and No. 2-seed Texas A&M in the tournament. The Gators lost 8-5 in the championship game to No. 1-seed Tennessee. Florida began SEC play with a 6-12 record through April 24, but turned it around after that point. They have won 16 of their last 21 games and have a 13-5 record in SEC play in that span.

Wyatt Langford continued to produce for the Gators. He hit .391 with two home runs, two doubles, and five RBI during the SEC tournament. He, alongside the emergence of Jac Caglianone, has been key to the Gators’ recent success. Both players were named to the 2022 SEC All-Tournament Team.

Liberty finished its season with a 37-21 record. They are led by left-handed pitcher Joe Adametz III. The southpaw has started 15 games for the Flames with a 2.47 ERA. The Flames faced the Gators to begin the college season. After winning the series opener 7-2, the Gators dropped two games to lose the series.

Central Michigan has a 42-17 record coming into the regional. They are led by right-handed pitcher Andrew Taylor. The sophomore has a 3.19 ERA with a 8-3 record this season. He has struck out 117 batters in 79 innings. The Chippewas are in their third consecutive NCAA tournament.

Oklahoma won the Big 12 Championship after defeating Texas 8-1. They have a record of 37-20. They are led by slugger Peyton Graham. The infielder has hit 16 homeruns with a 1.070 OPS which lead the team. The Sooners will appear in their first regional since 2018.

This will be the 18th time in program history where Florida hosts a regional. The winner of the Gainesville regional will take on the winner of the Blacksburg Regional which includes No. 4 national seed Virginia Tech, Gonzaga, Columbia and Wright State.