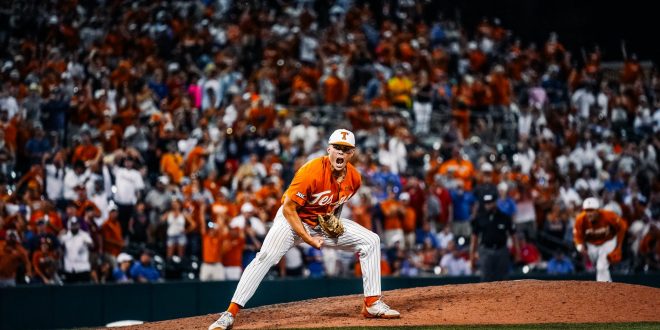 16 teams remain in the 2022 College World Series. The SEC has 5 teams still in the Super Regionals representing the conference. (Photo from @NCAABaseball on Twitter)

The NCAA Regional Tournament finished Monday night, and the 16 teams advancing to the Super Regionals are officially set, including five SEC teams.

Heading into the Regional Round the SEC had nine different teams still competing but after Monday night’s elimination games four were sent home: Florida, Vanderbilt, LSU, and Georgia. However, five of the nine SEC teams managed to scathe off elimination with a College World Series in mind.

The SEC has the MOST teams in Supers!

No. 17 Auburn cruised through their regional bracket without taking a loss and scoring 51 runs over the three-game stretch. An average of 17 runs a game. Auburn will look to keep the bats hot when they travel to No. 3 Oregon State on Saturday.

Ole Miss clinched their spot in the Super Regional after dealing with multiple weather delays and edging out the No. 6 Miami Hurricanes. Ole Miss travels to in-state rival Southern Mississippi for a three-game series and a chance at the College World Series. Since 2007, the two teams have faced off 32 times. Each team has 16 wins. This should be a fun one in Hattiesburg.

Arkansas won their first two in the Regional Round before falling to Oklahoma State in third, forcing a win-or-go-home game. Arkansas eventually won the close-out game-clinching their bid to the Super Regionals. The Razorbacks travel to Chapel Hill to battle North Carolina for a shot at the College World Series. Game 1 is scheduled for Saturday at 4 p.m.

No. 5 Texas A&M did a clean sweep through their regional round setting them up to host their Super Regional. No. 12 Louisville travels to Olsen Field in what’s likely the best matchup among SEC teams, for a best-of-three series beginning on Friday.

No. 1 Tennessee baseball hosts Notre Dame for their Super Regional matchup beginning on Friday. The Vols maintain the best pitching staff in college baseball. Thus, they should remain the favorite by a good margin.

Super Regionals begin Friday, and by the start of next week, eight teams will have punched their ticket to Omaha.

Here’s a look at the full Super Regional bracket: