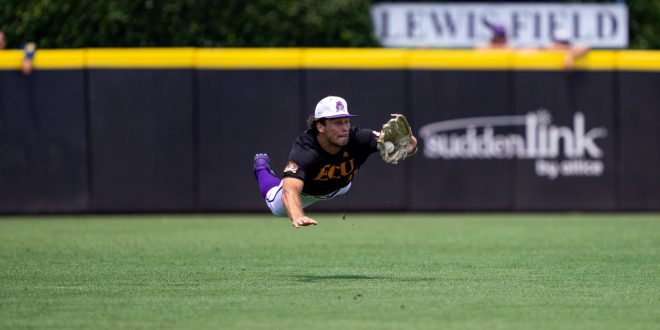 The East Carolina Pirates host the Texas Longhorns in the Super Regionals of the College World Series. (Photo from @NCAABaseball on Twitter)

Eight seed East Carolina is set to host their first-ever NCAA Super Regional on campus when they take on nine seed Texas in a best of three series this weekend. The Pirates and Longhorns displayed incredible offense in their Regional matchups and look to carry that on this round.

Going into the Super Regional, East Carolina has an impressive 45-19 record overall and won the American Athletic Conference.

In the NCAA tournament, the Pirates have dominated opponents, outscoring them 39-16.

The Texas Longhorns had the same regular-season record as the Pirates with a 45-19 record.

Despite ending the season losing the Big 12, the Longhorns have rebounded and have shown dominance in the NCAA Tournament.

The Longhorn’s pitching and hitting are peaking at the right time. In the Regional, they outscored opponents 26-6 and posted a team 2.00 ERA.

Looking at the Longhorns

The Longhorns have had their most explosive offense in their history this year with a program-record 118 home runs.

While the offense is explosive, the defense and pitching did not disappoint either.

BALLGAME! @ivanmelendez17_ hits his 30th bomb, @dylancamp25 smacks two of his own, and Texas defeats Air Force, 10-1, to advance to the Super Regional! #HookEm | #KeepGoin pic.twitter.com/43z4J1lnVv

Entering the Super Regional, the Longhorns have won 11 out of their last 13 and look to advance to their 38th College World Series.

Preview of the Pirates

The scorching hot Pirates ended the season on a 20-game winning streak that was snapped two games ago by Coastal Carolina.

The Pirates carried a defensive identity this year with the nation’s third-best fielding percentage and a combined 4.05 ERA.

East Carolina reliever Carter Spivey has shut down opponents all season, posting a 2.43 ERA while appearing in 33 games.

Spivey ranked 18th in ERA in the nation and became the first-ever reliever to win American Athletic Conference Pitcher-of-the-Year.

Infielder Ivan Melendez has had one of the most remarkable seasons by any player this year.

Melendez has an extraordinary .404 batting average with a 1.4 OPS and 30 home runs. He led the Longhorns in every major hitting category.

Melendez is one of five finalists for the Howser Trophy, awarded to the national player of the year.

The Greenville Super Regional will start Friday and Saturday at noon on ESPN 2.