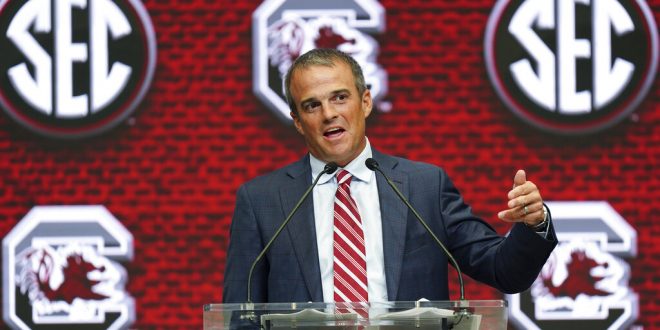 South Carolina football Head Coach Shane Beamer spoke about his confidence in the Gamecocks squad for the upcoming season at SEC Media Days on Tuesday. The coach shared a monologue from the podium at the College Football Hall of Fame that forced fans to turn heads.

In the year prior, Beamer showcased an impressive first season at South Carolina and earned co-SEC Coach of the Year honors. He led the Gamecocks to finish the season with seven wins and complete the year with a major victory over North Carolina in the Mayo Bowl. Gamecock fans anticipate what’s to come in the future for Carolina football.

Beamer’s confidence in the Gamecocks squad is fueled by a stacked roster of returning starters and a large number of transfers. One of those is former five-star quarterback Spencer Rattler.

Gamecock nation is certainly eager to see what Rattler will bring to the field this season. The Oklahoma transfer went from Heisman Trophy front-runner to riding the bench last season at Oklahoma before making the move to South Carolina.

Beamer spoke on what fans can expect from Rattler and how the Oklahoma transfer exudes all of the qualities he was searching for in a QB.

When questioned about the high amount of pressure atop Rattler’s shoulders, Beamer was quick to shake it off. The coach explained how pressure is nothing new for the former starting quarterback at Oklahoma. After filling the shoes of greats like Baker Mayfield, Kyler Murray, and Jalen Hurts, Rattler has proven he is not one to fall to pressure.

Rattler has two seasons of collegiate eligibility remaining unless he has an outstanding season and leaves early for the 2023 NFL Draft. Rattler brings stability to the quarterback position this season, which is something South Carolina has not seen in a while.

At the very core of the roster are many returning seniors. These seniors will look to lead the team this upcoming season. The offensive line got together and made the decision to return to play under Beamer.

Beamer spoke on how gratifying and humbling it is that so many of the seniors are choosing to invest in the program by returning for this season.

“It’s a testament to what we’re doing in the program and what our players saw last season, what we’re about that it’s not just talk it’s action… that they want to continue to be a a part of it that they enjoy it…I don’t ever want our players to dread walking into our facility each day,” Beamer said.

Another crucial component of the Gamecocks roster is Juju McDowell. Beamer discussed how McDowell brings a competitive spirit on the field as well as great energy behind the scenes. He put up an impressive performance as a true freshman.

Beamer reflected on one of the biggest plays from the previous season at East Carolina. It was the fourth quarter when McDowell had a 70-80 yard kickoff return that completely flipped the momentum of the game. After being down 14-0, the Gamecocks managed to win the game and continue on to go 2-0.

Beamer credits McDowell for making an “early impact” by inspiring the team’s performance for the remainder of the season. Beamer shared how he has high hopes for McDowell this season. “Our team is a better team when Juju is on the field, I know that,” Beamer added.

The Competitive Nature of the SEC East

Beamer concluded his monologue at SEC Media Day by addressing the rising competitive nature that the SEC East will showcase this season. Beamer had the following to say about the coaching changes in the conference.

Beamer explains how seven wins last season is not satisfactory and his expectations for the fall are much higher. Beamer and the Gamecocks plan to threaten Georgia’s reign at the top of the SEC East this fall. Beamer’s confidence on SEC Media Day is causing an uproar on social media. We’ll see if the program has the talent to back it up on the field this fall.

South Carolina's Shane Beamer: "Last year nobody was talking about us. The most noise we made at last year's media days was when we recreated Coach Spurrier's picture from Arby's. This year people are talking about us nationally"

Ellie is a third-year sports and media journalism major at the University of Florida.
@ellie_shreve
Previous Mike Leach Speaks on Mississippi State Football
Next Billy Napier Talks at the SEC Media Days