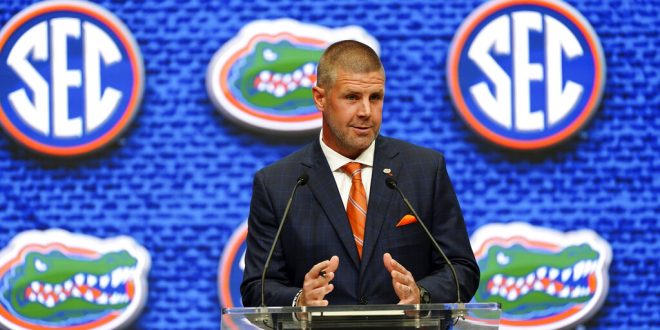 Wednesday marks the third day of the SEC Media Days. Each team sent their coaches and some of their top players to answer questions by the media and give an insight on their respective programs. Head coach Billy Napier, quarterback Anthony Richardson, offensive lineman Richard Gouraige and linebacker Ventrell Miller all represented the Florida Gators on Day Three.

Along with speaking to reporters in Atlanta, Napier spoke to WRUF’s Steve Russell on SportScene to further discuss the state of the program.

Before speaking to the media at the SEC Media Days, Napier took the time to speak with Steve Russell on SportScene.

One of his first discussions was on the University of Florida leadership. He praised UF president Kent Fuchs and athletic director Scott Stricklin for creating a great foundation for the Gator football team and all of their other sports.

The first-year head coach also had a lot of praise for his players. He is impressed with how they have responded to the work he has given them and looks forward to continuing to develop them.

Napier also stressed the importance of leadership among the roster. It is important for him that the veterans help develop the new guys along the way. This will not only help the rookies, but teaching their skills will also allow the veterans to improve as well.

The NCAA has changed drastically over the past couple of years. This change has not only changed the realities of the athletes, but it has also created a new era of NCAA coaching. Napier had a lot to say on the new era of coaching in the FBS and the challenges that come with it.

The challenges that come with the NIL also have a big effect on recruiting. He discussed how the NIL is a “gamechanger” to the recruiting game.

The Florida Gators basically have an entirely new roster and staff. The program has a completely new look, but Napier could not help but express his appreciation for his staff and how impressed he is with the players and how they are adapting to his process.

He specifically put a spotlight on the three players joining him in Atlanta – those being  Richardson, Gouraige and Miller. He is impressed with how they are developing on and off the field, and becoming key leaders on the roster.

When specifically talking about Richardson, Napier said he is impressed with his determination and talent but says there is still a lot to develop with his game.

Napier has a lot of pride in the Gators program. He is excited about the future and believes that they have a strong foundation to be successful for a long time. He discussed what image he has for his program.

To build the program of his image, Napier has to be smart about his recruiting. He felt very well about how he and his staff did when it came to his first round of recruiting for the Gators. He stated that he thought they made the most out of their time in all possible recruiting opportunities.

Napier could not fulfill his mission of building up the Gators football program without the years of experience he had coaching around the NCAA. Most recently, he spent the last four years with the Louisiana Ragin’ Cajuns as their head coach. He was able to successfully lead his team to a perfect 8-0 conference record this season, along with a 13-1 overall record.

He discussed the lessons he learned coaching in Lafayette and the gradual improvements of the program.

Billy Napier has put a lot of thought and time into recreating the Florida Gators football program. As we have seen throughout Wednesday, he is confident in the group he has put together, and he is excited for the future of the program and the success it will bring to the University of Florida.

Journalism student at the University of Florida. Contributor for WRUF and WUFT. You can reach Aileyahu at a.markellshanes@ufl.edu or 786-316-5878.
@a_shanes10
Previous 2022 SEC Media Day: Shane Beamer and South Carolina Football
Next Kirby Smart Discusses Georgia Football