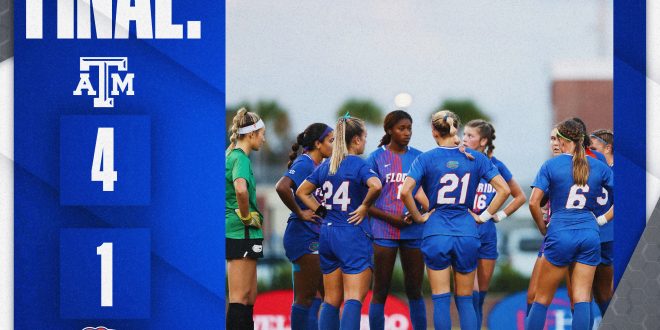 The Florida Gator soccer team hosted Texas A&M for Senior Night in its last home game of the season and the outcome for Florida was not good as the Gators fall 4-1.  This was also Florida’s last game of the season as it will not qualify to participate in the SEC Tournament. Florida finishes 2-14-1 on the season while not winning an SEC contest.

Texas A&M Takes the First Half

The first goal of the game came early in the match, at the end of the game’s fourth minute, from A&M’s Maile Hayes, assisted by Kate Colvin. The Aggies also occupied most of their time near the Gator’s box in the first 10 minutes.

The match got physical quick, with Florida’s Maddy Pirrello getting a yellow card in just the eighth minute.

The Aggies score their second goal off a shot awarded by a foul from Macy Matula, assisted by keeper Kenna Caldwell. The Aggies dominated possession in the first half, barely allowing Florida past the half-field line and allowing zero attacking opportunities.

The Aggies score again in the 27th minute, coming from Mia Pante. The Gators struggled to pressure the Aggie’s when attacking near the box.

Near the end of the first half, the Gators began to find their footing, getting more possession on the Aggie’s side of the pitch and some good shots, but they could not convert any of the chances.

Just a minute before halftime, Florida’s Julianne Leskauskas suffered a significant injury and had to be helped off the pitch. Leskauskas is a major offensive and defensive threat and was the only Gator with a shot on goal.

Going into the locker room at the half, the Aggies led 2-0 and took nine shots with five on goal compared to the Gator’s two shots with one on goal. The physicality didn’t let up from either side from the whistle, with Florida with eight fouls, twice as many as the Aggies.

The Aggies came out strong, keeping the ball right outside the Gator’s box and keeping pressure on keeper Alexa Goldberg.

Leskaukas returned to the pitch after half in the 55th minute reinvigorating the Gators.

The Gators continued to make good attacking positions from A&M mistakes but struggled to finish near the net. The Gator defense found its game plan in the second half shutting down the explosive Aggie offense with great coverage and hustle.

Breaking the drought late in the second half, the Gator’s Madison Young scores off a corner-kick opportunity from Delaney Tauzel, reenergizing the team and the fans.

Just moments later however, the Aggies strike back with a goal by Malie Hayes off an assist from Sydney Becerra.  The Aggies thrived off forward runs and passed with pinpoint accuracy while finishing calmly under pressure.

With 10 minutes to go in the half, the Gators look like a different team applying constant pressure on the ball holder and taking more opportunities near the box.

The Gator defense did not let up, not even in the final minutes, but they couldn’t stop the Aggie forward run. The squad left everything on the field and looks to improve next season.

End of the Season

At the end of Florida coach Samantha Bohon’s first season as coach she had a lot to say about this year’s team and the near future for the Gator soccer squad.

Bohon spoke on the next move for the team and how they plan to move forward saying that the seniors plan on celebrating their time as Gators.

Bohon went on to say that the team and staff have an idea of what to improve in order to be better prepared next season and they cant wait to get back to work.