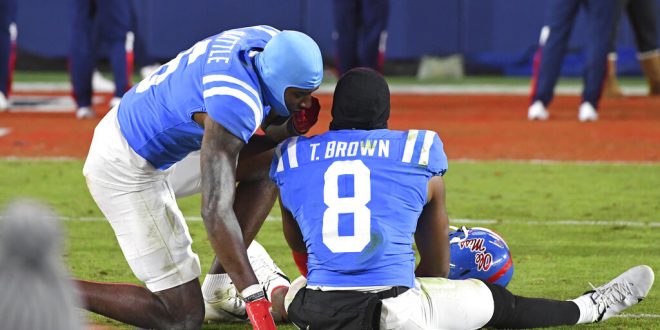 Another exciting SEC matchup in college football is on tap for Saturday night. The No. 14 Ole Miss Rebels take on an Arkansas squad that is looking to become bowl eligible.

Both teams’ records may be vastly different, but there are some key similarities that make this matchup particularly interesting.

Last one at home. Under the Lights. pic.twitter.com/qw17xpXW5I

Who Will Stop the Run?

The Rebels and Razorbacks are teams that have a strong run game while also blocking the run game well.

Freshman Quinshon Judkins is leading the rushing game for Ole Miss. In 205 touches, he has run for 1,171 yards which leads the SEC. That is 5.7 yards per carry. He also has 15 rushing touchdowns and a receiving touchdown.

For Arkansas, their leading running back is Raheim Sanders. He has 1,147 rushing yards and is averaging over six yards per carry. He also has seven touchdowns to go along with that.

On the defensive side of the ball, both teams are very similar when it comes to defending the run. The Razorbacks give up around 146 rushing yards per game while the Rebels are right behind them giving up 151 yards per game from the ground.

Dominating in both areas will be a key focus for both teams and can be a big factor in whichever teams comes out on top.

Both teams are also led by very solid quarterbacks.

Sophomore Jaxson Dart is a big reason why Ole Miss holds a 4-2 SEC record and an 8-2 overall record. The USC transfer has thrown for over 2,000 yards, 15 touchdowns and only seven interceptions so far this season. On top of that, he’s compiled over 500 yards from the ground.

KJ Jefferson leads the Razorbacks at QB. The Junior racked up over 1,900 passing yards, 17 touchdowns and only three interceptions. He has also completed almost 67% of his passes. Many argue that if Jefferson played against LSU last week, they could have come out with a win instead of settling for the 13-10 loss against the Tigers.

Although the Rebels are the heavy favorites coming into Saturday’s game, Arkansas has a successful history at home against them. The Razorbacks are 12-2 against Ole Miss in Fayetteville.

Journalism student at the University of Florida. Contributor for WRUF and WUFT. You can reach Aileyahu at a.markellshanes@ufl.edu or 786-316-5878.
@a_shanes10
Previous FEATURE: The Story of Gator Tennis Alum Johannes Ingildsen
Next Hawthorne hosts Wildwood in 1R Regional Semifinal