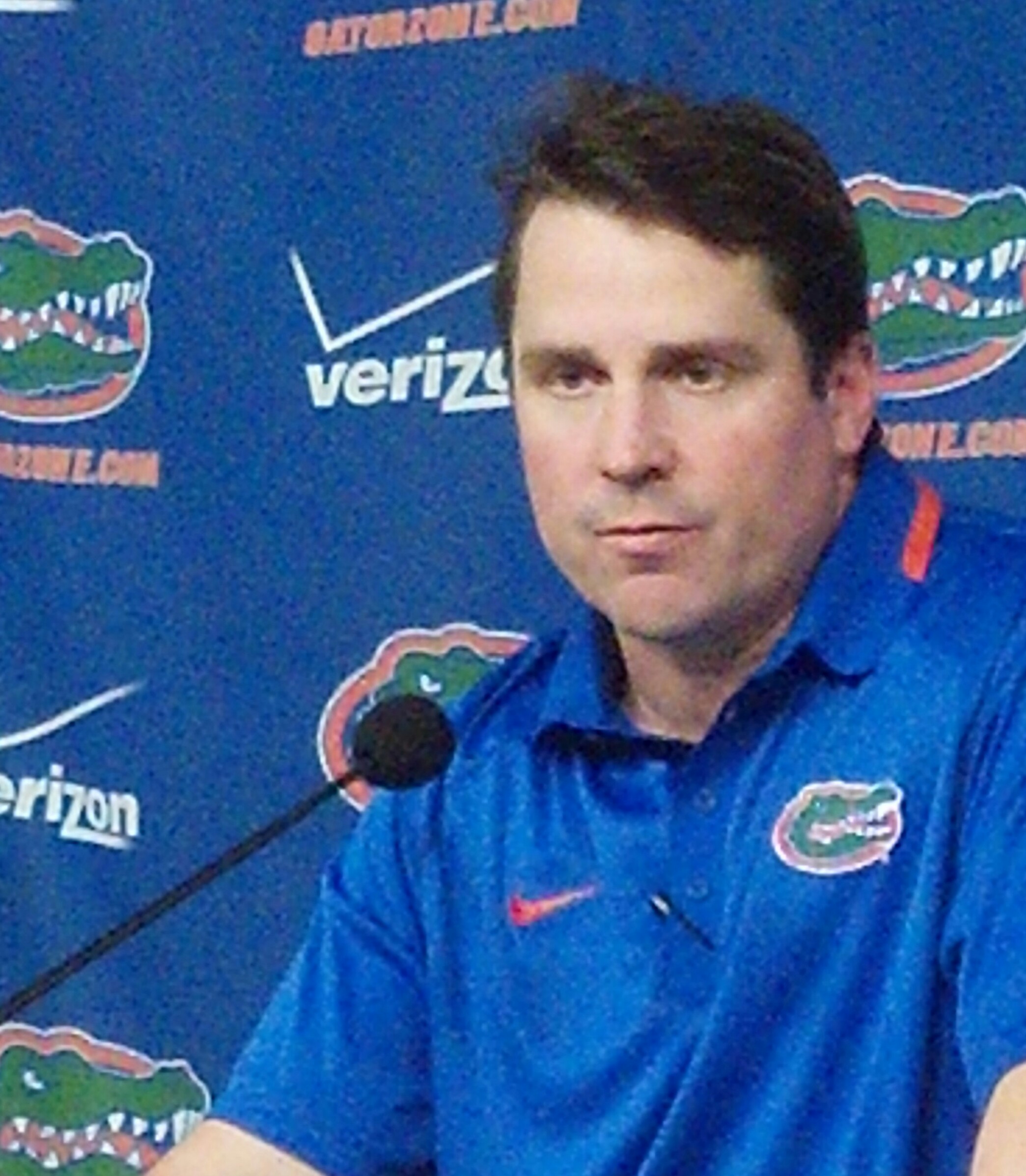 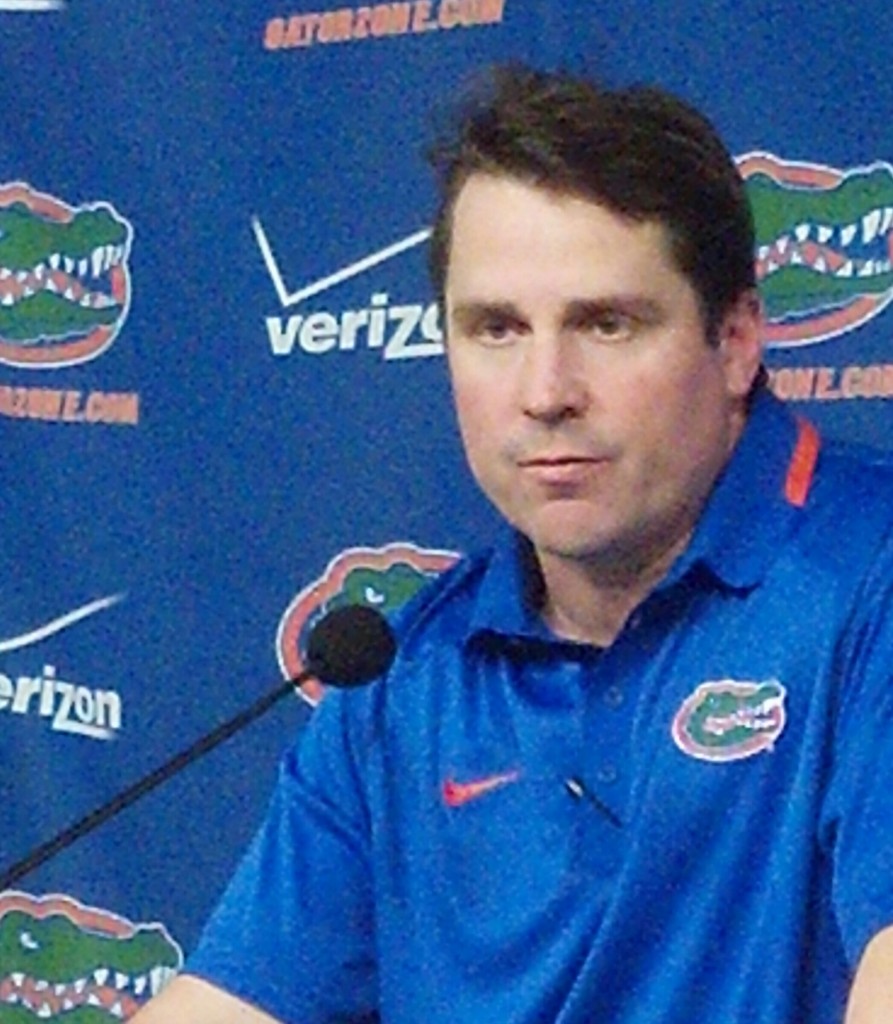 Florida Head Coach Will Muschamp addresses the media following a 26-20 loss to Georgia Southern. The Gators allowed 429 rushing yards to the Eagles. (Photo by: Robert Judin)

You read that correctly.

The Eagles were 0-20 against NCAA Division I opponents until they got the chance to swarm “The Swamp” as time expired. They kept chipping away at the Gators’ defense and gashed Florida for 429 rushing yards.

Florida’s Head Coach Will Muschamp said he was “very disappointed for our program,” and he called the loss “an embarrassment.”

“When you stop teams like this, you get them feeling uncomfortable about what they’re doing. You got to get them out of their game with what they do. We just never could do it,” Muschamp said.

The game didn’t start out in the Eagles’ favor though.

Florida literally ran the ball down the throats of the Eagles on the opening drive of the game but could not jam it into the end zone.

After redshirt-freshman quarterback Skyler Mornhinweg nearly threw two interceptions – one of them being a break up that wide receiver Solomon Patton had to claw away from cornerback Darius Safford – Florida’s Frankie Velez split the uprights for a 27-yard field goal.

The portion of Gator fans in attendance reluctantly applauded, taking what they could get from Florida’s offense. Ironically they cheered equally as loud for a six-yard completion from Mornhinweg to freshman wide receiver Ahmad Fulwood in the third quarter.

So imagine the delight of crowd when Mornhinweg hooked up with Patton for a three-yard touchdown in the right corner of the end zone almost two minutes into the second quarter.

But the team ranked second in the Southeastern Conference in rushing attempts with 421 – and ranked No.13 in rushing yards with 1,514 – stayed true to its form. Florida ran the ball 23 times in the first half and racked up 111 yards.

Freshman running back Kelvin Taylor took credit for 65 of those yards on 13 carries.

Georgia Southern, though, entered the game with, statistically, the best rushing attack in college football and an average of 353.5 rushing yards a game. That’s one advantage of running a triple option offense.

The Eagles ‘ 171 rushing yards at halftime was complimented by a 45-yard touchdown run from quarterback Kevin Ellison, who was eager to show Florida’s secondary his last name. The run took a grand total of 10 seconds and pulled the Eagles within three.

Florida linebacker Darrin Kitchens said the defense had no idea they were giving up so many rushing yards. He said there were a “few undisciplined plays” where defenders “had their eyes in the wrong place, and they capitalized on it.”

Muschamp said it was just the design of the Eagles’ offense that stifled his defense.

The Gators led 10-7 at halftime, and if the Eagles’ Josh Gebhardt had not blocked Velez’s second field goal attempt, Florida would have tacked on three more.

A 66-yard run from quarterback Jerick McKinnon put the Eagles in the red zone, and Ellison snuck across the goal line for a 1-yard run. Georgia Southern led 14-10.

Fullback William Banks got the handoff and bullied his way three yards for another touchdown. The Eagles’ Younghoe Koo missed the extra point, leaving Florida in the game with 4:34 left in the third quarter.

After Velez tacked on his second field goal of the day with 12:02 remaining in the fourth quarter, Florida found itself trailing by a touchdown.

One of the key moments of the game was a failed fourth-down conversion by the Eagles that was stopped by Florida’s Marcus Maye behind the line of scrimmage that gave Florida life.

The Gators started in their own territory with 6:45 remaining and decided to switch things up. After Taylor took it 14 yards on two carries, Mornhinweg got the green light for a play-action pass.

The redshirt-freshman stood firm with the 283 pound defensive tackle, Blake Riley, in his face, and he lofted a pass on the money to a streaking Patton for a 46-yard touchdown.

A 53-yard run by Banks, and Florida was on its heels again. On the very next play, McKinnon took a pitch around the right edge and put the Eagles ahead. Another missed extra point by Koo, and the Gators were back to square one with less than three minutes on the clock.

In a last minute drive, Mornhinweg narrowly missed wide receiver Quinton Dunbar at the right-front pylon, which would have tied the game. Florida was unable to get the job done.

If things weren’t tough enough, Florida will host the No.2 ranked team in the country, and long-time rival, Florida State – fun times for Gator fans amidst the team’s first losing season since 1979. That team went 0-10-1.

“We’re Gators. We should be winning every game,” Mornhinweg said. “We got to go regroup (and) get ready for Florida State though.”

To hear more from Coach Muschamp and Mornhinweg, click here: